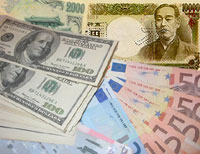 Asian stocks rose, sending the region's benchmark to its biggest advance in three weeks. The yen traded near a one-month low against the dollar and dropped against South Africa 's rand.

The currency also fell against the Australian dollar.

This drop seems to be profitable for carry-trades, as their investors buy higher-yielding assets with money borrowed in countries with lower borrowing costs, such as Japan 's 0.5 percent. While Brazil 's benchmark rate is 11.25 percent, Sweden 's is 4 percent and Norway 's is 5.25 percent.

Analytics think that yen will weaken further. Investors prefer to risk and until they get good stock market gains, they will buy yen.

The strategy is considered risky because the profits between the borrowing and lending rates may turn out to be low.