By Anastasia Tomazhenkova: French food group Danone, the leader in dairy products, announced that its net income tripled thanks to a 3.1 billion euros capital gain on the sale of its biscuit business and as it bought Dutch babyfood maker Numico. 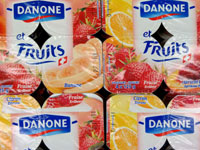 Danone bought Numico and left the cookie business to focus on faster-growing health foods. The company is counting on Numico's Nutricia and Cow & Gate brands for infants to lift profitability as rising milk costs threaten growth and a trademark dispute weighs on sales in China. The company reiterated its sales-growth forecast of 8% to 10%, excluding acquisitions and currency swings.

In a statement, the maker of Evian bottled water and Actimel yoghurts said the changes should allow it to grow faster and more profitably in coming years.

Sales from current operations rose 3.6% to 14.6 billion euros, beating the 13.2 billion euros estimated in the survey.

The sales figures included only six months of revenues from its Wahaha Chinese drinks joint venture, because of a dispute with its local partner, and two months of Numico sales.