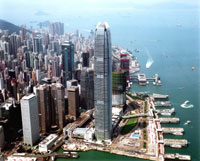 Concern about the outlook for the U.S. economy, a major export market for Hong Kong, has sent shares sliding in 2008. The index has lost more than 11 percent since the end of last year on a raft of negative data suggesting the world's largest economy is slipping into a recession. Some analysts believe the Hong Kong bourse is now oversold and will rebound on bargain hunting.

Even though Hong Kong is said to be a good example of laissez-faire capitalism, there are still many ways in which the government is involved in the economy. The government has intervened to create economic institutions such as the Hong Kong Stock Market and has been involved in public works projects and extensive social welfare spending. All land in Hong Kong is owned by the government and leased to private users. By restricting the sale of land leases, the Hong Kong government keeps the price of land at what some would say are artificially high prices and this allows the government to support public spending with a low tax rate.