By margarita Snegireva. A closely watched index of future economic activity dropped for a third straight month in December, implying growth will remain sluggish and faces rising risks of weakening, the Conference Board said on Friday. 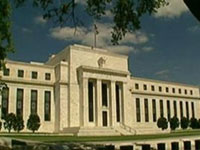 The business research group said its Index of Leading Economic Indicators fell 0.2 percent in December after drops of 0.4 percent in November and 0.7 percent in October.

The collapse in home construction, less hiring and a slowdown in consumer spending could spell the end of the expansion that started in 2001. Federal Reserve policymakers have signaled they will lower interest rates this month, and the Bush administration on Friday announced a stimulus plan to forestall a downturn.

In a research note issued Friday, Jack Ablin, chief investment officer with Harris Private Bank in Chicago , said "a recession is probably upon us, and it is likely going to last longer than just two quarters."