By Anastasia Tomazhenkova: Microsoft has hired Disney and General Motors veteran Tony Scott as a new chief information officer, he will start next month. The announcement comes just a week after the company tapped Stephen Elop, chief operating officer of Juniper Networks, to replace company veteran Jeff Raikes in the high-profile job of business division president. 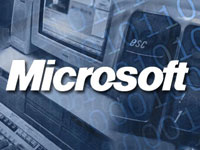 Mr. Scott most recently held the position of information chief at Walt Disney Co. Prior to that, he served as chief technology officer at General Motors Corp. and vice president of operations at Bristol-Meyers Squibb Co.

Tony Scott replaces former chief information officer Stuart Scott. He was dismissed several months ago for "violation of company policies". Stuart Scott was also an autsider, joining Microsoft in 2003 from General Electric. Stuart and Tony are not related.

For a long time Microsoft prided itself on promoting from within. But industry experts say that the pace of innovation and competition in recent years has forced the company to bring in outside talent with fresh ideas. Last year, for instance, John Schappert, executive vice president of Electronics Arts, was named corporate vice president of Xbox Live, Microsoft's interactive entertainment division. In 2006, Microsoft hired Ask.com Chief Executive Steve Berkowitz to head its online services. And in 2005, Microsoft acquired Groove Networks and named its founder, Ray Ozzie, as its chief technical officer.

Microsoft is committed to both developing internal talent as well as recruiting great talent from outside the company. Even so, the list of outside recruits goes on and on.

Microsoft's CIO, unlike other companies, deals with both internal and external issues. At Microsoft believe that the CIO is the first reference for customers. "He has to go out and convince them Microsoft products are ready to use," said Microsoft spokesman.

Mr. Scott will report to Chief Operating Officer Kevin Turner. "Our internal IT systems and operations play a critical role in the success of our business and how we deliver new technologies and advancements to our customers in the marketplace," Turner said. "We will leverage Tony's deep experience in running global IT organizations."