Experts: Korean POSCO to return to earnings growth in 2008 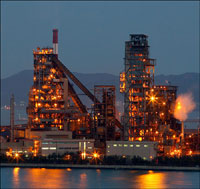 Experts: Korean POSCO to return to earnings growth in 2008

The South Korean firm, however, forecast its 2008 operating profit would rise 11.6 percent, while analysts said POSCO would return to earnings growth in the first quarter as the company is likely to raise prices for its steel products

The Pohang Iron and Steel Company, or POSCO, based in Pohang, South Korea, is the third largest steel producer in the world.

Currently, POSCO operates two steel mills in the country, one in Pohang and the other in Gwangyang. In addition, POSCO operates a joint venture with U.S. Steel, USS-POSCO, which is located in Pittsburg, California.

Along with Samsung Electronics, POSCO is viewed by many Koreans as a symbol of national pride and 'can do' spirit. With the strong Korean shipbuilding and automobile industry dependent on POSCO for steel, it has been seen as the bedrock of Korea's industrial development over the past 40 years.