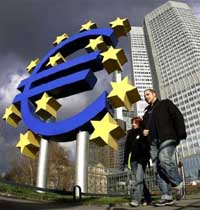 The EU statistical agency Eurostat said Friday that inflation in the 13 nations that share the euro achieved the highest level since consumers began using the currency in 2002 – 3 percent.

That was up from 2.6 percent in October, both well above the European Central Bank's guideline of just under 2 percent. That adds pressure for it to raise borrowing costs to cool higher prices, even as the effects of the subprime lending crisis has led the U.S. to cut rates.

But euro-area growth picked up speed as trade and investments increased, with the economy growing 2.7 percent in the third quarter from a year ago - or 0.7 percent from the previous quarter - after braking sharply in the second quarter, Eurostat said in a first estimate.

EU officials predicted earlier this month that the expansion of the European economy would slow over the next two years because of rising oil prices and tighter borrowing conditions stemming from defaults and writedowns of U.S. housing loans.

The troubles in the U.S. economy and the cuts to interest rates have driven the dollar sharply lower against the euro - a mixed blessing for the European currency, and a growing worry for some exporters that see their products cost more for customers paying in dollars or yen.

Business and consumer confidence fell again in the euro area and across the entire 27-nation European Union, the European Commission said separately - insisting that its economic weather vane is still above a long-term average.

On the positive side, however, Europe attracted more investment in the third quarter, up 1.1 percent compared to zero growth in the previous quarter. Exports were up in the three months ending Sept. 30 - by 2.5 percent quarter-on-quarter - but so too were imports, by 2.7 percent.

Partly shielding the region so far is a trend for the economy to depend more on domestic demand than its initial reliance on more exports to an expanding global economy. Europeans were still spending over the summer, even though consumption growth was down slightly to 0.5 percent from 0.6 percent in the second quarter.

Within Europe, there have been winners and losers from the strong euro. While Germany, one of the world's leading exporters, has weathered a stronger euro so far, France has been seeing more problems.

French President Nicolas Sarkozy again pushed for more open discussion of the ECB's control over monetary policy in a newspaper interview Friday, adding to earlier calls for the bank to tackle the strong euro and boost economic growth.

He told the Italian daily Corriere della Sera that "I don't see any reason why we shouldn't talk about its choices."

Sarkozy's statement takes on the ECB's insistence that it remain free from political advice when it takes crucial economic decisions - a stance Germany has consistently defended.

German Finance Minister Peer Steinbrueck told the FT Deutschland daily that he was not worried about accelerating inflation, saying it would drop again next year.

Inflation in the euro zone has spiked in recent months as European prices for oil and food rise. Eurostat's figure is a first estimate that it will confirm on Dec. 14 when it will give more details of the factors pushing up prices in the currency zone.

The Commission's economic sentiment indicator slipped to 104.8 for the euro area in November, the lowest it has been in the last year and down from 106 in October. The full 27-nation EU reported 107.6, down from 109.6.

Consumers were downbeat about the general economic situation, their own finances and employment in the next year - with French shoppers more pessimistic than worried counterparts in Britain, Germany, Spain and Italy.

The services sector declined markedly below the average as businesses said they believe demand will fall sharply in the near future.

But there were glimmers of good news. The retail sector was optimistic as it hits its Christmas shopping stride and industry confidence picked up slightly. The EU's executive arm also said its monthly survey of industry managers recovered slightly in November, up to 1.04 from 0.88 in October - though it remains at its lowest level since May 2006.

The business climate indicator rose because managers saw a "significant improvement" in recent production trends and were optimistic about output and orders in months ahead. However, they were more downbeat about export orders in coming months.