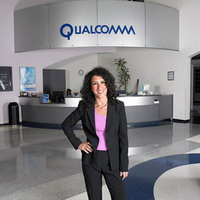 It's the latest legal cannonball hurled by Broadcom in its wide-ranging court battle with Qualcomm over the rights to technology for cell phones.

The move comes two days after Broadcom chose to accept a reduced damage award of $19.6 million (13.2 million EUR) rather than retry its case against Qualcomm in a federal court in Santa Ana.

Selna overturned his own ruling after a federal appeals court raised the threshold for proving patent infringement. That ruling came in a dispute between an individual investor and the Massachusetts Institute of Technology against Seagate Technology, the world's largest maker of hard drives.

Broadcom spokesman Bill Blanning said the company was glad Selna allowed the original jury verdict to stand and hoped he would grant the company's request for an injunction on Qualcomm's production of third-generation WCDMA and EV-DO cellular chips.

Qualcomm, based in San Diego, is the world's second-largest chip supplier for mobile phones after Texas Instruments Inc. Qualcomm earns much of its money from licensing fees on its patented technology.

Broadcom, based in Irvine, is a newcomer to the cell phone business but has scored several legal victories against Qualcomm this year.