The dead body of a pensioner remained unburied in her daughter’s apartment for seven years. The secret was unveiled just when the callous daughter, named as Tamara, died of cardiac rupture in the same apartment where she was keeping the mummified body of her mother on the balcony. 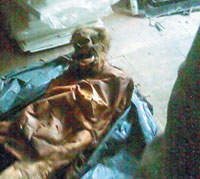 Forensic expert examined the dead body of Maria Volga, born in 1914 and estimated that she had died probably six or seven years ago.

Tamara Volga, the daughter of the elderly woman whose body was found mummified on the balcony, dedicated her life to keeping dogs. She shared her one-room apartment in the city of Chelyabinsk with the elderly mother and four dogs.

A woman living next door said that the old lady often complained that she had to wear thick quilted pants and thick winter boots at home not to feel dogs’ bites. The old lady even had to secretly eat dog food as she was given no other meals to eat.

In 2000 the elderly woman suddenly disappeared, and her daughter said that the mother had left for Ukraine to visit her relatives, the newspaper Life (Zhizn) wrote.

Several years later, almost all tenants of the apartment building could hear the daughter of the mysteriously vanished old lady screaming: “Do not touch me! Leave me alone!” When the neighbors opened the door of the apartment they found the woman dead of infarction.

It was rumored soon after the incident that Tamara probably died of fear. Neighbors said that the mummy of Tamara’s mother that she had been keeping on the balcony for many years took revenge on the daughter for the fact that the dead body was not buried properly.

Neighbors are sure that Tamara starved the mother to death and later took the punishment for it. A friend of the family says that Tamara often took her dogs and left for a dog’s nursery where they stayed for months sometimes. At that, the old mother stayed at home alone having no money for food. It is not ruled out, the friend says, that once Tamara returned back home and found her mother dead. The daughter could not afford the funeral, so she wrapped the dead body in polyethylene and placed it on the balcony.