Eight people on board the An-12 cargo plane were killed, when the plane crashed soon after the take off in the Moscow region today. The plane burst into flames and burnt completely, officials of the Russian EMERCOM said. 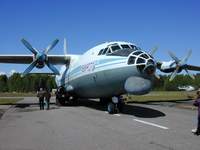 “The body of An-12 is completely destroyed. Its fuel tanks were full. The wreckage was scattered in a great radius,” Viktor Beltsov, an official of the ministry told Itar-Tass on Sunday.

The plane hit the ground just after it took off from southeastern Moscow's Domodedovo airport at 04:16 Moscow time (0016 GMT). An-12 cargo plane, which belonged to the Atran Company, fell down four km away from the runway and went on fire with eight people onboard, said spokesperson Viktor Beltsov.

"The plane left Domodedovo for Bratsk at 04:16 Moscow time and was supposed to make an interim landing in Omsk. There were eight people onboard, including five crewmen and three passengers," Beltsov was quoted as saying.

The aircraft's oil tanks were filled with petrol for taking-off and it was smashed into pieces scattering at a large range of field, he said.

Another source with the ministry, however, was quoted by Itar-Tass as saying that there were seven people onboard and all of them were crewmen, Xinhua reports.

The Domodedovo airport was operating normally after the crash. "All planes take off and land according to schedule," Itar-Tass said, citing an airport representative.

The four-engine propeller-driven An-12 was one of the most dated plane series in Russia. They were first put into service in 1958 and were now used for middle-and-long range cargo transport