The press service of the Russian EMERCOM confirmed the information about the tragic incident in the town of Chusovoi, the Perm region of Russia. The concrete roof of the town's "Dolphin Pool" collapsed yesterday, killing at least 14 people swimming in the pool. 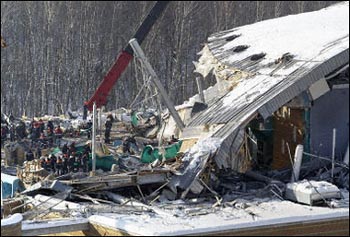 Rescuers are currently clearing the rubble off the site of the tragedy. For the time being, it is not known how many people were staying in the pool at the moment when the roof of the building caved in.

The tragedy happened yesterday in the afternoon. About 70 percent of the pool (100 m2) was heaped up with concrete debris. Rescuers say that the incident could occur because of sudden temperature difference or profuse snowfalls. Specialists also say that the catastrophe took place because of metal fatigue in one of the boarding joists of the pool building. A source from the regional administration told Interfax that the version of a terrorist act was excluded.

The photo gallery of the incident

"Dolphin Pool" was built in Chusovoy eleven years ago. The number of victims of the incident in the town has reached 14: ten children and four women, Itar-Tass reported with reference to a senior official form the Russian EMERCOM, Anatoli Shinakov. The children killed with the collapsed roof were between three and thirteen years of age.

According to Shinakov, eleven other people, including six children, were hospitalized with severe injuries (brain concussion and bone fractures).

The roof of the pool building collapsed at 2:33 p.m. local time yesterday. Forty-two concrete slabs fell down in the 25x10 pool, burying 30 people.

The administration of the Perm region of Russia (Ural Mountains) is to announce the day when the region mourns the victims of the tragic incident in the town of Chusovoi.

The catastrophe in Chusovoi echoes a similar tragedy at a popular water park in Moscow. The collapse of the concrete dome of Transvaal Water Park killed 28 and injured over 100 in February 2004.