Having killed the landlady, the tenant buried her corpse in the yard. The man bought several rose bushes to disguise the place where he had buried the woman. 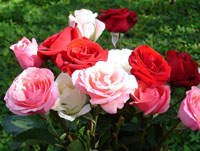 This criminal story happened in the Russian resort town of Koktebel. The investigation showed that the man, 37, came to Koktebel from Odessa to find a job. He paid money to an old lady to rent a room .

Some time later the man started drinking and the old lady did not like it and began criticizing him. During one of their quarrels the man pushed the woman and she hit her head against a heating radiator. She lost consciousness. The man came up to a unconscious woman and strangled her.

To conceal the evidence of his crime the man went to the yard and buried the old lady. The man found that the grave contrasted greatly against the scenery in the yard so he decided to buy some rose bushes to plant them there. However, such actions didn’t help the man to avoid justice.

The old lady’s nephew came to visit his aunt because she had not called him for more than a week. When he entered the house he found a stranger there.

The stranger told the nephew that his aunt fell ill and went to some other town to improve her health. The nephew did not believe the story and called the police.

When the police came to the old lady’s house and found her corpse buried underneath the flowerbed of roses.