Bullies crucify and torture conscript to death in Russian army

Another terrible incident of hazing in the Russian army has recently been made public, although it happened four years ago. 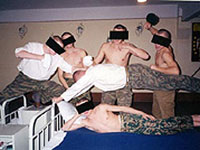 Bullies crucify and torture conscript to death in Russian army

Russian commanding officer ordered to crucify and torture one of his soldiers to death. Conscript Yaroslav Lazorev, born in 1982, was serving in the Russian army in the Yekaterinburg region. In December 2003 he was tortured to death by his fellow-soldiers who were acting by their commander’s order.

According to Yekaterinburg garrison court, Denis Shakovets, the company commander, ordered to tie Yaroslav Lazarev to iron bars and then told other soldiers to beat and abuse him for several hours. Soldiers beat him with their fists, legs, rubber batons and tortured im with bared electric wires. These tortures led to a traumatic shock and Lazarev died the following morning.

In 2004 the Yekaterinburg garrison court sentenced the soldiers who tortured Lazarev to eight years of imprisonment. Denis Shakovets who gave the order was sentenced to two years, Regnum reports.

On May 31, 2007, The Foundation for Mothers' Rights has filed a lawsuit against the military unit to make it pay a compensation to the mother of the tortured soldier.