Mother hangs her four children and herself in Texas, smallest baby survives

Alejandra Estrada broke into her sister's trailer because she wanted to know why she had not shown up at work. Inside, she found Gilberta Estrada and Gilberta's four young daughters hanging in a closet. 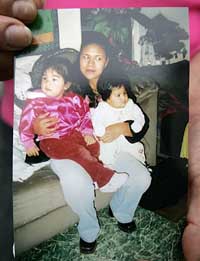 Mother hangs her four children and herself in Texas, smallest baby survives

Gilberta Estrada, 25, and three of the girls were dead. The youngest, 8-month-old Evelyn Frayre, was alive but in dire need of medical care.

Alejandra Estrada pulled the infant from the noose and called the police emergency dispatcher. The child was listed in good condition at a Fort Worth hospital, Parker County Sheriff Larry Fowler said.

Fowler said the hangings appeared to be murder-suicide because the doors were locked from the inside and a relative said Gilberta Estrada had been depressed. He said they had last been seen alive Monday afternoon outside the trailer and things had appeared normal.

"My mind cannot get around how all this can happen," Fowler said. "It's almost unthinkable."

Filly Echeverria, who said she was the children's godmother, identified the dead children as Maria Teresa Estrada, Janet Frayre and Magaly Frayre. Authorities said they believed their ages were 5, 3 and 2.

Fowler said more information, such as how long they had been dead and whether the children were drugged or suffocated before they were hanged, would be released after autopsies Wednesday.

After hanging her daughters with pieces of clothing tied around a wooden board that served as a clothes rod, Estrada apparently looped the noose around her neck, leaned into it and buckled her knees to kill herself, Fowler said.

He said Gilberta Estrada had won a temporary restraining order in August against Gregorio Frayre Rodriguez, believed to be the father of Evelyn and some of the other youngsters, after a domestic violence incident involving Estrada.

Fowler said the couple had stopped living together in February. Tuesday was the first emergency police call to the trailer, and Fowler said there was no evidence that Frayre abused the girls.

A telephone listing for Frayre, 38, could not immediately be located.

Child Protective Services will decide who will take custody of the baby, Fowler said.

Texas has had several children killed by their mothers in recent years.

Less than five years ago, another family in the Hudson Oaks trailer park was torn apart when Dee Etta Perez, 39, shot her three children, ages 4, 9 and 10, before killing herself.

Andrea Yates drowned her five children in the family's Houston bathtub in 2001. In 2003, Deanna Laney beat her two young sons to death with stones in East Texas, and Lisa Ann Diaz drowned her daughters in a Plano bathtub. Dena Schlosser fatally severed her 10-month-old daughter's arms with a kitchen knife in their suburban Dallas home in 2004.

All four of those women were found innocent by reason of insanity. Yates initially was convicted of capital murder, but that verdict was overturned on appeal.