Two daughters-in-law could not share the house of their mother-in-law. Valentina maintained that Nadezhda made the old lady starve, willing to become the owner of the house. Nadezhda, in her turn, said that her rival was just envious and claimed to possess the old lady’s house. While the quarrel continued the old lady was turning into a skeleton… 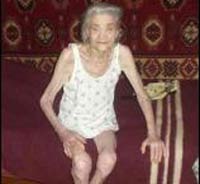 In 2002 Valentina Yaschenko filed a police reports saying that her husband’s first wife, who was taking care of their mother-in-law, was starving the old lady.

The husband died a year before, and his second wife inherited only an old car while his first wife together with her son moved to her mother-in-law’s house to look after her. According to the gift certificate Nadezhda was to inherit the old lady’s house and land which cost about 80,000 dollars.

Valentina’s claims attracted the police’s attention and a police officer was sent to check the information.

Eyewitnesses said that the old lady, whose name was Dunia, weighed only 29 kilograms and looked like a skeleton covered with skin. The neighbors could see her outdoors on extremely rare occasions: her daughter-in-law did not allow anybody to visit her.

The police helped Valentina take her mother-in-law to live in her flat in spite of the fact that the old lady told the police that she felt comfortable with Nadezhda who was looking after her.