Osama bin Laden ordered a top lieutenant in early 2005 to form a terrorist cell to plot attacks outside of Iraq and make the United States the top target, a senior U.S. official said on Tuesday. 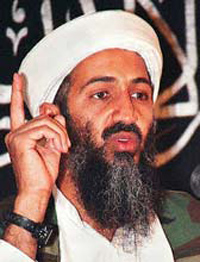 Citing newly declassified intelligence, Frances Fragos Townsend, the White House homeland security adviser, said the intelligence backed the Bush administration's assertion that al-Qaeda wants to use Iraq as a staging area for attacks around the world, including the U.S., so the U.S. troops must stay in Iraq to prevent it from becoming a "terrorist sanctuary."

Townsend spoke to reporters on the eve of a Bush speech at the U.S. Coast Guard Academy to update the war on terrorism, and as congressional Democrats backed off on demands that Iraq war funding be tied to a troop pullout timetable.

Reading from notes, she said the declassified intelligence showed that in January 2005, bin Laden tasked al-Zarqawi with organizing the cell. Al-Zarqawi, the former leader of al-Qaeda's Iraq operations, was killed in June 2006 by a U.S. airstrike, Xinhuanet reports.

The Bush White House has intermittently declassified and made public sensitive intelligence information to help rebut critics or defend programs or actions against possibly adverse decisions in the Congress or the courts. On a few occasions, the declassified materials were intended as proof that terrorists see Iraq as a critical staging ground for global operations.

Democrats and other critics have accused Bush of selectively declassifying intelligence, including portions of a sensitive National Intelligence Estimate on Iraq, to justify the U.S.-led invasion on the ground that Saddam Hussein's regime possessed weapons of mass destruction. That assertion proved false.

Townsend, reading from notes, said the declassified intelligence showed that in January 2005, bin Laden tasked al-Zarqawi with organizing the cell. Al-Zarqawi, the former leader of al-Qaeda's Iraq operations, was killed there in June 2006 by a U.S. airstrike.

"We know from the intelligence community that al-Zarqawi welcomed the tasking and claimed he already had some good proposals," Townsend said.

She said that in the spring of 2005, bin Laden instructed Hamza Rabia, a senior operative, to brief al-Zarqawi on al-Qaeda planning to attack sites outside Iraq, including the United States. She did not disclose where in the United States those attacks were being plotted.

Around the same time, Abu Fajah al-Libi, a senior al-Qaeda manager, suggested that bin Laden send Rabia to Iraq to actually help al-Zarqawi plan the external operations, Townsend said. It is unclear whether Rabia went to Iraq, she said.