The religious fanatic refused to eat food with bar-code, thought that a phone was a weapon of the Devil and prepared himself for the doomsday. When the man came to hospital with plenty of cuts on his genitals, doctors realized that it was time to isolate him. When the doctors came to the patient’s house they saw an awful scene. 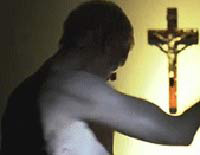 A brutal murder was committed in the Russian town of Irkutsk. A young married couple was stabbed to death in their own house. The husband’s head was separated from his body.

It is still unclear what really happened in the flat. The brother of the slaughtered man acts as the only suspect on the case. He was living in the same flat where the crime was committed but was later placed in a hospital for mentally unbalanced individuals.

Both the victims of the crime and their relative were religious people. The couple was leading a secular lifestyle, although they observed Christian fasts, rituals and holidays. The young people couple studied at a local university by correspondence and worked as train conductors. The family was growing a child.

When the homicide occurred the child was not at home: the parents had sent him to relatives, which literally saved the child’s life, Nomer Odin Newspaper reports.

The suspect, 30, was very strict as far as faith was concerned. His obsession progressed considerably after he returned from Kyevo-Pecherska Lavra (a monastery in Kiev, Ukraine). He was living there for quite a long time willing to become a novice and later a monk.

However, the man suddenly returned home to his brother. He tried to persuade his relatives that the doomsday would come soon and that they must not use phones and eat food marked bar-code. The man himself ate only bread with water.

Neighbors said that there were no serious quarrels in the family. However, one day the might-have-been monk came to hospital with a serious slash wound on his penis. Doctors noticed that the man’s behavior was inadequate and decided to place him in an asylum. When the man was hospitalized and his relatives identified, doctors went to visit them to take his clothes and documents. When they arrived they found the above-described awful scene.