It seems that the monster who raped and brutally killed the 5-year-old Polina Malkova (article) in the city of Krasnoyarsk, Siberia, has taken cover in Moscow. That is probably why an unprecedented manhunt conducted in Krasnoyarsk and vicinity over the last several weeks has yielded no results so far. 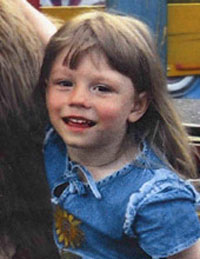 Sources in the police suggest that the cold-blooded murderer fled Krasnoyarsk and went to Moscow shortly after committing the hideous crime. The criminal is apparently planning to get lost in the multimillion megalopolis.

All police officers in Krasnoyarsk were issued a description and composite facial image of the criminal. The description is a detailed summary of the accounts provided by those who saw a man dragging a crying girl by the hand on the day Polina disappeared.

According to description, the suspect is about 30 years old. He has an elongated face of European type. There is a noticeable scar in the temporal area of his forehead. His hair is black and cut short. There are tattoos shaped like rings and a cross on the fingers of his left hand.

Evgeny Volynkin, head of criminal investigation department of the Siberian Law Institute in Krasnoyarsk, emphasized that the tattoos on the suspect’s left hand clearly indicated a criminal record.

“I’m confident that the suspect is a repeat offender,” said Volynkin, in an interview to Tvoi Den. “The tattoos in the shape of a ring on two of his fingers indicate that the suspect has served at least two prison terms. A cross-shaped tattoo on his middle finger indicates the suspect is a rebel; he has no respect for authority and law enforcers. By all appearances, he is the one who resists any authority or control. In short, he is in ‘complete opposition’ to the established law and order,” Volynkin said.

More than 2,000 police officers and investigators have been engaged in the manhunt yet the criminal is still at large. Assistant to the prosecutor of the Krasnoyarsk Region Elena Pimonenko released a statement one day after the funeral of Polina Malkova: “We are currently working with a number of suspects pertaining to the case. However, I can provide no names or other details at the moment because the case is ongoing.”

A view from Moscow

Investigators believe the suspect has moved to Moscow to hide out in a city populated by several million people.

“Moscow provides him a good chance to go into hiding,” said a source in Moscow’s Transport Police Department. “As a rule, the transport police are the first to be notified if a criminal breaks loose somewhere in the provinces. It makes no difference whether we have detailed or scarce information on a suspect.

A fugitive is promptly put on a nationwide list of wanted criminals if we know his given and family names. A composite facial image is prepared and dispatched to every police station across the country if we have nothing but a suspect’s description. We constantly update a data bank of several suspects wanted by the police. I believe we can track down and apprehend that Krasnoyarsk monster in Moscow,” said the source.

No limits to freedom of speech on Pravda.ru forum