FBI agents have recently arrested a Russian employee of the United Nations Organization in New York, Vladimir Kuznetsov. The Russian diplomat, 48,  was arrested less than a month after the arrest of another Russian UN official over the money laundering allegation. Kuznetsov was charged with money laundering conspiracy within the scope of the Oil for Food Program to help Iraqi citizens during 1996-2003. It is too early to talk about an extensive international response about the incident: the arrested Russian was a UN official, but not a representative of Russia in the United Nations Organization. 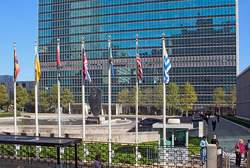 The Oil for Food program was effected at the end of 1996. The program was meant to prevent a humanitarian catastrophe in Iraq, which had been imposed with economic sanctions after Saddam Hussein-led intervention in Kuwait. Iraq was deprived of an opportunity to export oil and was then unable to purchase food for its people. The terms stipulated Baghdad selling a part of its oil to acquire food and medicines with the profit.

After the incursion of the anti-Saddam coalition in Iraq in March of 2003, the FBI started receiving information about numerous financial intrigues during the implementation of the program. A special committee for investigation tracked down UN Secretary General Kofi Annan's son, Kojo Annan. He was charged with concealing the fact of working in a company, who obtained one of Iraqi contracts. The secretary general's son was inspecting the import of goods that were delivered to Iraq within the framework of the program. A shadow was cast on Kofi Annan in particular and on the UN in general. However, the investigation later revealed that the secretary was not involved in the scandal.

A Russian trace was found in the case on August 8 of the current year, when the FBI arrested Alexander Yakovlev, the diplomat, who was working in the UN purchasing department from 1985 to 1993. The official confessed to have received almost one million dollar of bribes from UN contractors. The UN deprived the official of diplomatic immunity. Alexander Yakovlev was forbidden to leave the country and was later released on a $400,000 bail. The Foreign Affairs Ministry of Russia decided that Yakovlev's arrest was not shadowing the Russian office in the UN: Yakovlev was never working either at the ministry or at the Russian representative office in the UN.

This time the FBI arrested another Russian UN official, Vladimir Kuznetsov, one of the most experienced UN diplomats from the budget committee of the organization. He pleaded not guilty at an arraignment in Manhattan federal court Friday afternoon and was released on a $1.5 million bond and agreement to surrender his travel documents, according to Reuters.

Russia's reaction in connection with Vladimir Kuznetsov's arrest has been quite restrained so far. According to an official spokesman for the Russian Foreign Affairs Ministry, Mikhail Kamynin, the ministry expects to receive additional information and explanations from US federal authorities and the UN secretariat to discuss an opportunity of a possible meeting with Vladimir Kuznetsov in New York. “When we have more information about the incident, we will be able to think our further steps and reaction through afterwards,” Kamynin said.

It is too early to say that Mr. Kuznetsov's  arrest gives a start to another anti-Russian campaign in the USA. It is worth mentioning here that US authorities have been striving for the extradition of the former head of the Russian Ministry for Atomic Power, Evgeni Adamov. For the time being, however, the FBI has caught only one Russian citizen, Alexander Yakovlev, who personally worked in the UN, although the case of Vladimir Kuznetsov is enveloped in mystery now. Investigators will have to prove the charges against Mr. Kuznetsov first: the court has not found the Russian UN official guilty of the charges yet. In addition, the charges relate to the Iraqi scandal only circumstantially. It is worthy of note that neither Yakovlev nor Kuznetsov worked as official representatives of Russia in the UN. One may thus infer that US-Russian relations are not facing another crisis yet.

Most likely, US federal authorities are pursuing three goals with the investigation: to justify the US-led incursion in Iraq and slander the UN. The US administration has been treating the United Nations as a burden for long already. American authorities have been looking for a reason to get rid of the organization and obtain the absolute freedom in the construction of the unipolar world. It just so happened that the Russian citizens turned out to be in their way.