The father of the killed girls killed the suspect, poured petrol on his body and struck a match

After two missing eight-year-old girls in the Dagestan village of Bashlykent were found at the farmland of one of the villagers, there came a lynch law of 200 villagers. Father of one of the girls caught the suspected criminal and killed him encouraged by his fellow-villagers. 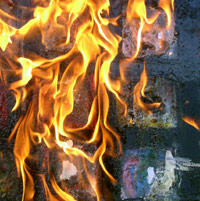 Having tracked down the supposed murderer, named as Agarza Omarov, 38, the father did not waste time on waiting till justice could make its decision. Delirious with grief he beat the man to death. He did not consider that enough, soaked his body with petrol set it on fire. This was not the end.

Shortly after that the group of 200 villagers decided to take revenge on the family of the killed man. They burned out the house, where the suspect lived, as well as three cars that were parked in the yard.

When the police arrived at the scene, they suppressed the mob and arrested the father of the girl. He has been charged with murder committed in the heat of passion. The investigation team of the prosecutor's office started working in the village.

The girls living in the village of Bashlykent went out and did not come back on 27 August. Local residents and police officers searched the village and found their bodies buried on one of the farmlands, the owner of which became the prime suspect. Results of the expertise stated that the two girls had been raped and then killed. It turned out later that the suspect had had previous criminal record, which included rape charges. When serving his sentence he was also charged with buggery.

When the girls' bodies had been found, crowds of villagers started gathering near the house of their parents and the suspect's house. Observers suspected that the man would fall the victim of the lynch law, which remains a common way of punishment in the Caucasus. However, the Ministry of Internal Affairs refused to acknowledge this information. Meantime, officers of the local police precinct agreed with the locals and also feared that the villagers would take justice into their hands. As it turned out, they were absolutely right.