An Indonesian jetliner carrying 140 people burst into flames as it landed on Java island Wednesday, trapping a number of people inside the burning plane, the airline and witnesses said. 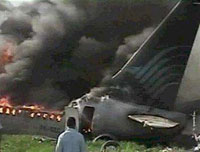 Indonesian officials had confirmed 49 deaths, though it was not clear where that information came from.

Cabinet Secretary Sudi Silalahi said after meeting Indonesia's president that 21 were confirmed dead and 96 others were being treated at three hospitals, some with broken bones and burns.

An airline official on the ground gave similar data, but said some passengers were thought to have walked away from the scene, making it difficult to confirm the death toll.

President Susilo Bambang Yudhoyono ordered a thorough investigation into the crash, appointing the security minister to look into possible "non-technical" causes, said spokesman Andi Mallarangengeng, in an apparent reference to sabotage. It was the second major airline accident in Indonesia this year.

The Garuda airlines jet shook violently as it prepared to land and then overshot the runway, hitting fences and slamming into a rice field shortly before 7 a.m., survivors said.

Many passengers escaped and rescuers battled flames to reach those trapped inside, said Capt. Ari Sapari, operations director of national carrier Garuda. The blaze, which gutted the aircraft and sent black smoke billowing into the air, took two hours to put out, the AP reports.

Yogyakarta, around 440 km southeast of the capital, Jakarta, is known as the cultural heart of Indonesia and is very popular with tourists, although it is the off season at the moment.

Regular travellers say the runway, used also by Indonesian air force planes and which suffered damage from a earthquake last year, frequently causes aircraft to hit hard while touching down, prompting gasps from passengers as the plane bounces to a halt.