Police last night arrested a man who they said was the gunman that shot dead two Russian women on a beach near Pattaya last Saturday. 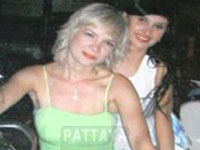 Anuchit Lamlert, an unemployed man with a long criminal record, allegedly confessed to shooting dead Tatiana Tsimfer, 30, and Liubov Svirkova, 25, while they sat drinking in deckchairs on Jomtien Beach.

But, chief investigator Pol Lt General Assawin Khwanmueng, said he did not believe the victims were killed solely for their valuables - as reportedly claimed.

A police source said investigators were also looking into a potential lead that a Thai woman hired Anuchit to kill both women because one of them had a fling with her Russian husband, who owns a tourism business in Pattaya, shortly after they visited his office.

"The Thai wife was worried that her husband might get attracted to the Russian woman and later leave her for the younger girl, so she [may have] decided to whack her potential rival," the source said.

Police are still looking for the murder weapon, a Chinese-made Norinco pistol, which Anuchit said he threw into a shrub-covered plot after shooting both victims.

Civil defence volunteers were mobilised to look for the handgun at press time last night, armed with high-powered spotlights.

Police apprehended Anuchit in a rented room in Sri Racha district, and later found his motorcycle - a red Honda Wave - the same model seen in the blurry video footage from security cameras near the murder site, at a different location in Bang Lamung district.

Police records show that Anuchit had frequently snatched gold necklaces and valuables from foreign tourists in the Pattaya area.

Earlier yesterday, a Pattaya mother had taken her son to see police to prove his innocence. She said he only looked similar to the man in a police mugshot branded as the suspected gunman that killed both victims. Thasorn Sawangchuen said her son Krissana Duangphibool had nothing to do with the murder, the Nation reports.

As Pravda.ru previously reported the sketch of a man suspected of killing Russian women was released yesterday. Head investigator Pol Lt-General Assawin Khwanmueng said later the sketch was drawn based on accounts of an eyewitness now under protection. The officer said the witness called the sketch a "remarkable resemblance" of the gunman he saw shooting the victims .