The two accidents happened with a four-hour difference

Two helicopters Mi-8 crashed on Thursday morning in Russia. One of them crashed near Khabarovsk (the Far East), another near Nefteyugansk (also in the Far East of Russia). 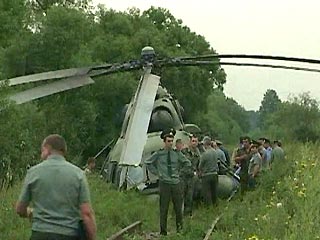 Civil helicopter Mi-8 of Argo airline crashed four kilometers south-west off the town of Nefteyugansk at 8 a.m. Moscow time, the Russian Ministry of Transport reported. Four of six passengers of the helicopter were killed, two were injured and subsequently hospitalized. One of the injured is in grave condition, a representative of the Russian EMERCOM press-service said.

The ministry also reported that a helicopter left Surgut for providing aid at the crash site. The helicopter that crashed near Nefteyugansk was flying to check an oil pipeline. The investigation is under way.

4,5 hours before the accident near Nefteyugansk another Mi-8 crashed near aerodrome about 40 km from Khabarovsk. The accident happened at 10.30 a.m. local time (3.30 a.m. Moscow time). There were three members of the crew and eight parachute jumpers on the helicopter, Interfax reports.

At the moment it is considered that the accident was caused by a technical malfunction. The head of the Russian Air Force, Colonel Alexander Drobyshevsky, said that the tail rotor gearbox broke.

Captain of the crew, Alexander Ivanenko, ordered eight parachute jumpers to leave the helicopter and tried to lead the helicopter away from buildings. The aircraft had a tough landing. Three pilots received injuries of different severity and were 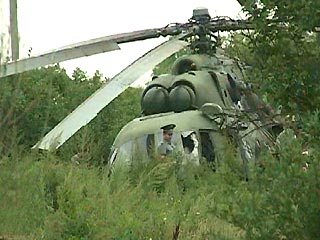 hospitalized. The captain of the crew broke both legs. It was reported earlier that the helicopter hooked one of the parachutes with its wings. The jumper is also in the hospital.

A case was initiated on the accident in acoordance with the article 351 of the Russian Criminal Code (“violation of the rules of flying and preparing to it”). Drobyshevsky said that the commander-in-chief of the Russian Air Force decided to suspend chopper flights until the cause of the accident is clarified.