All passengers killed in Venezuela's air crash were French tourists

As Venezuelan investigators try to determine what caused the crash of the Colombian plane on Tuesday morning, the West Caribbean Airways company confirmed yesterday that all the 152 passengers killed in the accident were French tourists travelling from Panama to the French Caribbean island of Martinique. Also 8 crew members of Colombian origin died in what is considered the deadliest crash in Venezuelan history. 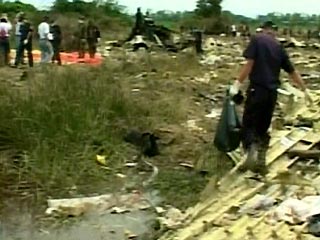 Early investigations confirmed that both engines of the Mc Donnell Douglas 82 jet failed as it comes out from a message issued by the pilot minutes before crashing the Andean mountains of Sierra de Perija. Seats, pillows, and smoldering wreckage were strewn across a pasture dotted with trees among cattle ranches near the border with Colombia. The plane's tail jutted from the ground.

Somber-faced rescue workers collected body parts and pieces of bone that lay near charred trees. "I was struck by all of the victims and the massive destruction," rescue worker Jose Pena told the local press.

As the plane developed problems hours before dawn Tuesday, the Colombian pilot radioed a nearby airport in Maracaibo requesting permission to descend from 33,000 feet to 14,000 feet, Venezuelan Interior Minister Jesse Chacon said. Investigators believe the jet fell into a steep descent minutes later, plunging about 7,000 feet a minute before slamming into the ground, Chacon said.

Venezuelan President Hugo Chavez phoned his French counterpart Jacques Chirac and Colombian leader Alvaro Uribe to express his condolences. "We are very saddened by this tragedy," Chavez said, saying both engines appeared to have simply "turned off."

According to some reports some descendants from the workers who built the Panama Canal a century ago were among the dead. Alina Guerrero, a spokeswoman for Panama's Foreign Ministry said the group chartered the flight as part of a program to visit descendants of the Caribbean immigrants who came to Panama to construct the canal.

West Caribbean Airways has a record of other mechanical problems and financial troubles, but airline officials insisted they did not cut corners on safety. The Colombian airline, based in Medellin, began service in 1998.