Rescuing works on the crash site of the McDonnell Douglas 80 jetliner in Venezuela will last for at least two days, the director of the Venezuelan civil defense service, Antonio Rivero said Tuesday. The air crash killed all 152 passengers and eight crewmembers on board. Spokespeople for Colombian authorities are working on the site of the air crash together with Venezuelan authorities. A French delegation is expected to arrive too, for all the passengers on board the crashed airliner were French. The people were returning home to Martinique Island in the Caribbean Sea after a week off in Panama. 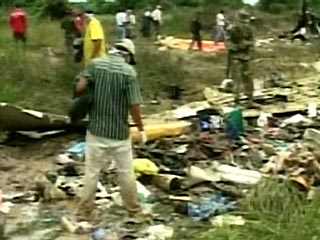 French President Jacques Chirac said in a televised address that the French government was closely cooperating both with Venezuelan authorities and President Hugo Chavez to find out the reasons of the air crash. Chirac expressed his condolences to relatives and friends of the killed passengers and said that the whole of France was supporting them during such a tragic moment.

Experts of French special services are arriving in Venezuela today to participate in the identification process.

The McDonnell Douglas 80 jetliner departed from the international airport of Caracas on time, without any problems and headed to the administrative center of Martinique, one of four overseas departments administered by France. The pilots reported engine problems to Venezuelan air traffic controllers afterwards. Minutes later, the controllers lost radio contact.

Eyewitnesses of the air crash told Venezuelan radio stations that they had seen the flaming jetliner falling and then exploding. Rescuers say that fragments of the plane had been scattered more than two kilometers around.

The plane crashed in a field along the eastern edge of the Sierra de Perija mountain range just inside Venezuela's rugged northwestern border with Colombia, about 90 miles southwest of the city of Maracaibo. One of the two flight recorders were found on the crash site yesterday.

West Caribbean, a seven-year-old airline that mainly serves northern Colombia and the Caribbean, has had troubles before. In March, a twin-engine propeller-driven plane operated by the airline crashed during takeoff from the small Colombian island of Providencia, killing six passengers and the two pilots. The cause has yet to be determined.