Berezovsky may be accessorial to Litvinenko’s death

The British government began tracking radioactive hotspots in London on Monday to trace the poison that killed a former KGB agent, and three people who reported possible symptoms of contamination underwent testing. 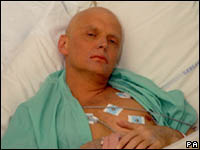 Berezovsky may be accessorial to Litvinenko’s death

Britain announced a formal inquest into the death of Alexander Litvinenko, but Home Secretary John Reid warned against rushing to conclusions over who might be responsible for the killing of the ex-spy turned Kremlin critic.

Litvinenko died Thursday after falling ill from what doctors said was poisoning by polonium-210, a radioactive isotope usually manufactured in specialized nuclear facilities. High doses of polonium, which is deadly if ingested or inhaled, were found in Litvinenko's body, the AP reports.

Police said traces of polonium-210 had been discovered in offices at 7 Down St. and 25 Grosvenor Sq. in central London. These offices are owned by the exiled Russian oligarch Boris Berezovsky They declined to provide further details, including why those addresses had come to the attention of investigators.

News media here reported that Russian tycoon Boris Berezovsky, another Putin critic who won asylum in Britain after fleeing Russia, maintains an office at the 7 Down St. building. Sky News reported that Litvinenko had visited a security company with offices at the Grosvenor Square building.

Litvinenko, a former colonel in the Federal Security Service, or FSB, the domestic successor to the KGB, publicly accused FSB agents of involvement in apartment building bombings in 1999 that killed more than 300 people. He also accused his FSB superiors of ordering him to kill Berezovsky.

Berezovsky said in a telephone interview last week that he visited Litvinenko in the hospital during his illness and said Litvinenko told him he had "no doubt" that he had been poisoned on the "order from President Putin to kill him." Berezovsky said poisoning was "a classic way" that Russian agents work, the Washington Post reports.

Radiological testing has been ordered for three people who may have come into contact with the poison that killed a former KGB agent turned Kremlin critic, health officials said.

Health officials will test the urine of the three — none of whom were health workers who treated Litvinenko, Lewis said. The tests should take about a week, irishexaminer.com says.