Beaten and buried alive soldier now surrenders himself to authorities

Russian army private Yevgeny Ovechkin who was severely beaten by his commander and then buried alive near the city of Yekaterinburg surrendered himself to the authorities. He and his parents came to the Prosecutor’s Office to tell details of the accident once again. 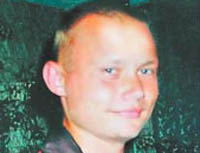 Beaten and buried alive soldier now surrenders himself to authorities

The private said that his drunken commander first brutally beat him and then buried the soldier alive in a forest. A resident of Yakaterinburg by chance witnessed the burial, he managed to dig the soldier out and save his life. He kept Yevgeny at his home for several weeks and nursed him back to health. When the soldier grew stronger he went into hiding. After four months, Yevgeny finally came out of hiding and surrendered himself to the authorities, the Tvoi Den newspaper reports.

The soldier’s mother tells that the family wanted to go to Yekaterinburg to find the old man who saved the son. Suddenly, Yevgeny’s father was summoned to the prosecutor for examination. When the father came back from the examination he talked to the son at length and it was decided that Yevgeny should surrender.

Yevgeny Ovechkin did not change his statement during the examination. He said it was true that Major Vladimir P. regularly hazed soldiers and beat many of them.

Meanwhile, the soldier’s mother says several attempts were made to try to convince her that what her son says could never happen at all. “ I did not see the monster bury Yevgeny . But I believe what my son says . We want to obtain justice ,” the woman says .

Private Yevgeny Ovechkin was drafted from Bashkiria in June 2005. His mother says the son was eager to serve in the army and made no attempts at all to evade conscription. Today Yevgeny says he will never set his foot in the army. For the time being, Yevgeny undergoes a medical examination by military doctors to get a legal cause for a release from the army. The Military Prosecutor’s Office told Yevgeny and his parents that the soldier would be released because of his state of health. Then, his family is going to bring an action against the military unit where Yevgeny served.

The RF Ministry of Defense denied the probability of harassment of private Ovechkin by his commander. November 17, Aide to the RF Air Force Commander-in-Chief Alexander Drobyshevsky said that based on publications about harassment of private Ovechkin a special commission of Air Force experts and Military Prosecutor’s Office representatives investigated the case at the military unit near Yekaterinburg in the middle of November. He also added that on March 17, 2006 the soldier had deserted from the military unit without permission and later on April 12 an action was brought against him in connection with the crime. “The military unit from where private Ovechkin deserted has a good reputation. Parents of soldiers and mass media are welcome to the unit to see how soldiers serve and live there, “Drobyshevsky added.

A criminal case was initiated against the commander of the military unit mentioned in connection with the crime; he is charged with exceeding the responsibilities, Deputy Military Prosecutor of Yekaterinburg Sergey Chernyshov said. He added that the Prosecutor’s Office has evidence proving the commander several times beat his soldiers.