No survivors found in Polish mine. Death toll reaches 23

Any hopes for survivors of a deadly mine explosion in southern Poland vanished Thursday after rescuers recovered the bodies of all 17 men who had been missing, bringing the final death toll to 23. 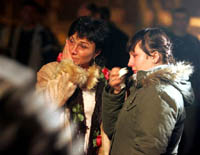 No survivors found in Polish mine. Death toll reaches 23

The men were killed by Tuesday's explosion more than 3,280 feet below the surface at the Halemba mine in southern Poland.

Six of the bodies were recovered shortly after the explosion and the remaining ones were located after rescue efforts resumed in the night, said Zbigniew Madej, spokesman for the state-run Coal Co.

The search had to be put on hold for most of the day Wednesday when teams encountered high concentrations of gas that they feared could cause a second explosion, the AP reports.

Rescue work had been suspended on Wednesday because conditions were too dangerous due to methane gas still in the mine.

The miners were in a shaft more than 1 km (0.6 miles) underground when the blast occurred.

Poland's state-run mining industry, built up before 1989 and starved of investment for years, has suffered hundreds of deaths over the last few decades.

Officials said the blast appeared to have damaged an underground water pump, flooding the area and leaving little hope anybody could be found alive.

Family members waited patiently at the pit for news and were offered counselling by local doctors, witnesses said, xinhuanet.com reports.

Poland's state-run mining industry, built up before the fall of communism in 1989 and starved of investment for years, has suffered hundreds of deaths over the last few decades.

President Lech Kaczynski, who visited the mine on Wednesday, told reporters there would be a public inquiry into the cause of the disaster, Reuters reports.