So many bats have infested the town's historic district that the sky turns black with each sunset and the neighborhood is calling on Batman to come to the rescue. 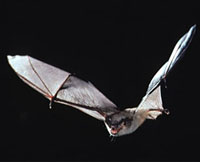 That's what the local bat remover goes by. George Perkins often makes public appearances in the caped crusader's costume and drives his own Batmobile - a retro-styled Chrysler Prowler with bat emblems.

The bat-weary residents of Americus aren't laughing. The Georgia Department of Natural Resources has proposed a long-term plan that includes surveying the bat population, possibly training city workers to do bat removals for needy homeowners and building bat houses in safe areas where the flying mammals can continue providing environmental benefits without being a nuisance.

"They're perpetual crap machines," said Tripp Pomeroy, who moved to the town of 17,000 in 1989 to work for Habitat for Humanity, which has its global headquarters here.

Pomeroy, now the co-owner of a fair-trade, organic coffee company known as Cafe Campesino, said he's spent $1,500 trying to evict bats from the attic of his 96-year-old traditional Southern home. Because of the health risks, he's reluctant to let his children sleep in their upstairs bedrooms.

Millions of bats - the leading cause of human rabies in the U.S. - have moved into the attics of Antebellum and Greek Revival mansions built in the 1800s and Victorian homes from the early 1900s in Americus' historic district covering about a third of the town's 10 square miles.

The bats swarm out in the evening and perform a community service by eating mosquitoes, gnats and other pests from twilight to dawn. Then, as the sun begins to rise, they head back to their dark attic lairs, where they urinate and leave piles of smelly guano.

Residents can't kill the bats because they are protected under Georgia law, like chipmunks and other non-game animals. Killing one carries a penalty of up to a year in jail and a $1,000 fine.

So they try to exclude them by plugging openings in their homes, a difficult task since bats can squeeze through holes as small as a dime.

Those who can afford professional help, send a distress signal to Perkins.

Perkins scampers up ladders with tubes of sealer and wire mesh to plug holes and create one-way doors that let the bats out, but not back in. He also crawls into attics with the bats. Once, he found a layer of guano 8 inches deep.

From 1990 to 2005, 31 of the 39 cases of human rabies were linked to rabies, making them the leading rabies threat to humans, according to the Atlanta-based federal Centers for Disease Control and Prevention.

Because bats have tiny teeth that don't leave obvious punctures, people may not even realize they've been bitten. Humans also can get rabies from a scratch or contact with bat saliva.

The disease usually kills animals and humans within 10 days, unless they get anti-rabies shots. In humans, that means six shots given over 30 days.