A seven-year-old girl whose father is on trial for circumcising her when she was two years old has testified that she remembers when her father cut her. 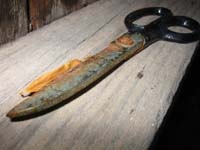 The girl took the stand Wednesday in Gwinnett County Superior Court and told prosecutors her father "cut me on my private part" while she was in her bedroom. The girl clutched a teddy bear as she testified.

Khalid Adem is on trial on charges that he circumcised the girl.

Prosecutors say Adem circumcised his daughter to avoid bringing shame on his family. Assistant District Attorney Marty First acknowledged that Adem, who was born in Ethiopia, is from a culture that practices female circumcision. But First told the jury that circumcision really is mutilation.

He could face 40 years in prison if convicted.

The defense blames his wife, her mother and a nasty divorce case.

As the girl took the stand, Gwinnett Superior Court Judge Richard Winegarden cleared the courtroom of spectators. Only Adem, court officials, the jury and reporters were allowed to remain.

The 31-year-old Adem is charged with aggravated battery and cruelty to children for the circumcision that authorities say occurred some time in 2001 in the family's apartment in Duluth. Police have said the father used scissors to circumcise. The child's mother also testified Wednesday that doctors didn't discover it until more than a year later.