Vladimir Romanov, a man who committed nine sex crimes in Russia’s Kaliningrad region, hanged himself in a prison cell on a bed sheet. Spokeswoman for the regional Office of the Public Prosecutor, Galina Biryukova, said that the man had already attempted to commit suicide before, during the first days after his arrest. On October 11 he made a rope of a bed sheet and killed himself. 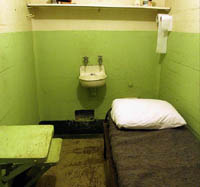 Romanov became known as the Kaliningrad maniac who terrified the region for five years. The manic was working as a private taxi driver. He was looking for his victims, teenage girls, in solitary places of the city in the evening time. Romanov, 56, killed nine underage girls and was arrested at the end of September of this year.

An investigator of the local police department said that Vladimir Romanov’s last victim managed to survive after the killer hit her with a hammer on the head. The girl escaped from the maniac and memorized the number of his car. The criminal was caught red-handed. It turned out that Romanov had already had a criminal record before for raping an underage girl.

The suspect was originally accused of killing six girls between 12 and 18 years of age. The list of victims was extended with five more names on October 3. However, prosecutors stated after the killer’s suicide that he had committed nine sex crimes in total.

The criminal charges have been officially brought against Vladimir Romanov this week. Having realized the severity of his crimes and the possible term of imprisonment, the man made a rope of his bed sheet and committed suicide in his prison cell on October 11.