Russia is inundated with oil

The worse is yet to come 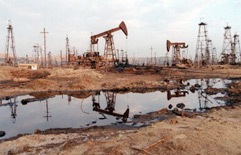 Hundred metric tons of fuel oil spilled in Tver region the last week as a result of a train crash is only a scintilla of oil pollution happening in Russia annually. According to the environmentalists' conservative estimations, the real amount of oil pollution can reach as much as 10 million metric tons per year

Russia produces annually around 450 million tons of oil; 50-60 thousands cases of spillage, according to the environmentalists, happen at the same time, in 300 cases of them over 10 000 tons of oil get to the soil and water.

The length of oil pipe-lines in Russia is around 350 thousands km. More than 40% main-line pipes are damaged by corrosion, 70% of them function more than 20 years, the serviceable life of the pipe-lines. The automatic gates work only when the pipe loses 1% of the contents. It results in 4-5 million tons getting into Russian water bodies. Aleksei Yablokov, the president of the Union of the Russian Greens, asserts that today no less than 5 % of Russia's territory is polluted with oil: “If this tendency persists, the country will soon turn into oil spot on the world's map”.

The most affected regions are Western Siberia, Northern Caucasus, the northern shore of the Caspian Sea, the Middle Volga region, the republics of Komi, Bashkortostan and Tatarstan.

Only in this year there were 6 major spillages resulting in oil getting into rivers Yenisei, Amur, Volga, a tributary of Northern Dvina – Yuros and into Ladoga lake. “The worse is yet to come”, says Mr. Yablokov. The environmentalist believe that the damage caused by the pollution costs as much as the income, earned by selling the oil.

But the biggest problem is not the oil spillages, but the lack of a proper state control. “The companies which spill their oil are interested neither in publicity, nor in clearing an affected area,” says Svyatoslav Zabelin, a co-chairman of the International socio-ecological union.

It's difficult just to imitate the European experience. “Europe is so densely populated – contrary to Russia - that if a drop of black oil spills, it's immediately reported”, explains Zabelin. “And there are enormous fines for the pollution in Europe and USA. The Russian fines are just ridiculous”. If an oil-producing company loses up to 1% of its oil during the transportation, it's easier thereby to lose 1% of its profit, than to spend billions on relaying pipelines.