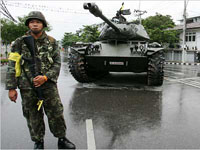 There were no reports of violence.

The moves came while Prime Minister Thaksin Shinawatra was in New York preparing to address the United Nations. He declared a state of emergency on Thai television, but was cut off in midspeech. Later, he canceled his address to the General Assembly.

The coup, led by the army chief, Gen. Sondhi Boonyaratkalin, also “terminated” both houses of Parliament, the cabinet and the Constitutional Court, New York Times reports.

Tanks and armored units of the Thai military have blocked the area around Thaksin's offices in Bangkok, and he declared a state of emergency via a government-owned TV station.

Thaksin was believed to be holed up at a hotel in Manhattan, just a few blocks from the U.N. headquarters.

A foreign ministry official, who spoke on condition of anonymity because he was not authorized to speak to the media, said Thaksin still tentatively planned to fly back to Thailand later Tuesday. The official said he could not comment on questions about the possibility of Thaksin being arrested if he returned, chron.com reports.

A senior army general said the chiefs of the army, navy and air force were meeting with the king to discuss the formation of aninterim government, suggesting it would probably be led by civilians.

"The armed forces commander and the national police commander have successfully taken over Bangkok and the surrounding area in order to maintain peace and order. There has been no struggle," the coup announcement said. "We ask for the cooperation of the public and ask your pardon for the inconvenience." The coup - apparently bloodless - was the first overt military intervention in the Thai political scene since 1992 when an attempt by Prime Minister Suchinda Kraprayoon, a military general, to retain power was countered by mass street demonstrations and Suchinda's ouster, jpost.com reports.

Throughout months of political stalemate, Thai army commander Sonthi Boonyaratglin swore the military had moved on from its days of meddling in government.

But having broken the mould as the first Muslim military chief in an overwhelmingly Buddhist country, the decorated Vietnam War veteran demonstrated that some habits are just too tough to kick.

Analysts said the promotion of a Muslim to head of the army appeared to be a deliberate attempt to resolve a separatist insurgency in Thailand 's Malay-majority far south, where more than 1,700 people have died in 2 years of violence, dnaindia.com says.