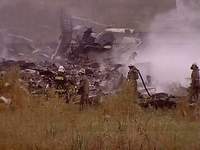 The plane supposedly crashed down from the height of 10-11 kilometers because of a lightning strike. All passengers and crew were killed. The reason of the plane crash will be possible to establish only when rescuers find the black boxes and specialists decode their recordings. According to the latest information, one of the flight recorders has just been found.

Spokespeople for the administration of the Anapa airport, from which the Tu-154 aircraft of Pulkovo Airlines departed to St.Petersburg, said that everything was in order with the plane when it left the airport.

About 100 relatives gathered at St.Petersburg’s Pulkovo Airport yesterday in the evening. There were no ads anywhere at the airport, but Pulkovo employees could easily see the grieving people among others. Everyone waiting for the arrival of flight 612 Anapa-St.Petersburg were taken upstairs to the airport cinema hall.

The lists of the flight 612 passengers were hanging on the walls of the cinema hall. A woman was swinging on a chair screaming “No, no, no, no!” She lost her daughter and two grandsons. A man standing nearby was carelessly holding a large bouquet of yellow chrysanthemum and a toy tank. Those were presents which he brought for his wife and son. “They were supposed to stay in Anapa longer. The son fell ill with quinsy so they had to come back earlier,” the man said.

Local residents who eye-witnessed the air crash said that the plane was spinning above the ground, hit the surface with its front part and exploded. “The sky was covered with black clouds, there was a strong thunderstorm at that moment. We heard the sound of a flying plane but could not see it at first. We and other people saw the liner when it was some 150 meters above the ground. I thought that it would fall down on us. It was spinning down very fast,” local resident Gennady Kursov said.

“We got into our car and drove to the crash site. We arrived several minutes after the tragedy. There were no firefighters, police officers or rescuers there yet. When approaching the burning fragments of the plane we saw two bodies of a man and a woman. We tried to help them but they were dead,” another local resident Nikolai Klimovetsky said.

Rescuers said that they found only 40 undamaged bodies after the crash. All other people were torn into pieces when the plane hit the ground.