The attack ended tragically: doctors failed to save the life of Sergei Bezhentsev 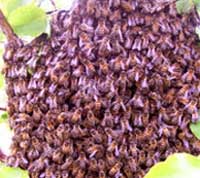 The inhabitants of the village of Alekseyevka, the Penza region of Russia, still remain in a state of shock. Sergei Bezhentsev, 17 years of age, sat down for a little break near the bee-garden. The man was a little drunk and he probably decided to disturb the bees although no one knows what happened exactly on the scene. Maybe the man did not want to do the bees any harm, or maybe he decided to play around and fight with bees. The village residents heard the screams in the area of the bee garden. They thought that several bees attacked a playful guy but he could easily run away from them so they paid no attention to the noise.

Sergei’s grandmother had a premonition of trouble. The old lady asked her neighbour, Yuri, to go to the bee-garden and pick up her grandson from there. When the man came to the bee-garden he saw a horrendous scene: thousands of bees were swarming on Sergei’s body. There were so many bees that his body was not visible underneath them. Yuri did not dare to approach the raging insects so he cried for beekeeper’s help. The two men put protective clothes on and scared the bees away from the young man. Afterwards they took Sergei’s body closer to water, but the young man could not speak – he was only gasping for air.

When Sergei’s mother saw her son’s body all swollen with bee stings, the woman fainted.

“We realized that it was a severe accident,” local doctor Antonina Myshenkova said. We took about 2,000 bee stings out of his body. We took all life-saving efforts possible, but Sergei died over bee poison overdose two days later,” the doctor added.