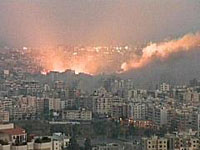 Gillerman said he met Russia's U.N. ambassador Vitaly Churkin to "explain that a ceasefire of this type would serve only one purpose, to allow Hizbollah to regroup and recover".

"We think this is a bad idea," Gillerman, speaking from New York, told Israel Radio.

Churkin introduced a resolution calling for a 72-hour humanitarian truce as a stop-gap measure should a U.S.-French draft resolution on ending hostilities be delayed further, Reuters reports.

Meanwhile, the French and the Americans made significant progress when they agreed on a timeline for withdrawal of Israeli troops from south Lebanon, a key demand of Lebanon and Hezbollah.

The compromise proposal, diplomats say, the United Nations Interim Force in Lebanon (UNIFIL) would be reinforced by 5,000 French troops that would back Lebanese forces in their attempt to take control of the south.

Israeli troops will withdraw from areas occupied by them and Hezbollah will withdraw 20 kilometers from the Israeli border, ndtv.com reports.

Lebanon apparently opposes major powers sending troops and wants its forces to control of the southern areas bordering Israel with the help of a reinforced UNIFIL.

It is yet unclear whether it would accept to have 5,000 well-armed French troops on its soil.

Israel wants to have some 20 km of buffer zone where Hezbollah would not operate as it says the militant group fires rockets into Israel form this area, the AP reports.