Another 9/11 prevented by British police

Police in the United Kingdom said on Thursday they have thwarted a plot to blow up aircraft in mid-flight, arresting about 20 people in the London area. 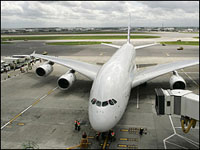 Another 9/11 prevented by British police

Britain raised its security-threat level to "critical", which means it expects an attack imminently. The Home Office website showed the rating was raised to "critical" from "severe" earlier on Thursday.

Britain has a five-level rating for security threats, ranging from low to critical, which is the highest level, Mail & Guardian reports.

According to the BBC, authorities say conspirators planned to blow up a number of planes flying to the U.S., using explosives hidden in carry-on luggage.

It followed an intelligence-led operation by the Met's anti-terrorist branch and security service.

Security at the country's airports was increased and additional measures were put in place for all flights.

British Airways advised all passengers that they would not be permitted to carry any hand baggage on board any aircraft departing from any airport in the country, the AP reports.