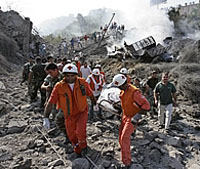 It was the largest number of Israeli civilian fatalities since 16 July, when eight workers were killed as a rocket struck a train depot in Haifa.

In response, sources told Israeli TV Israel would destroy Lebanon's infrastructure if that threat was carried out.

Then late last night, two huge explosions rocked Beirut in what local media said were new Israeli air strikes on Hezbollah strongholds south of the city. There were no immediate reports of casualties.

Four Israeli soldiers were also killed in southern Lebanon yesterday, taking the Israeli death toll to 68 - 27 of them civilians.

Mr Olmert said in interviews that the fighting would take several days "and not weeks" until the international community decided on the deployment of an international force in southern Lebanon. But Hezbollah, its confidence growing, insisted it would not agree to a ceasefire as long as a single Israeli soldier remained on Lebanese soil, Scotsman says.

Israeli warplanes sharply increased their bombing raids on the Lebanese capital this morning, for the first time blowing up bridges in the Christian areas north of Beirut during the morning rush hour.

Beirut media reported 24 Israeli bombing runs in one hour. Four Lebanese civilians died and ten were wounded in the airstrikes on the north of the city, according to the Lebanese Red Cross, and a Lebanese soldier and at least three civilians were killed in air raids near the airport and over the hitherto unbombed area of Uzai in the south of the city.

Israel dropped leaflets warning civilians to evacuate southern Beirut, suggesting that the raids are far from over, Times Online reports.