Laser could not save Israeli from Hezbollah’s missiles

Despite all the achievements of advanced technology, Israeli soldiers are powerless in the face of Hezbollah’s home-made missiles. After ten years of joint work by Israel and the USA, constructors rejected the idea of creating a laser gun for the national air defense. This wonder-weapon cannot resist Hezbollah’s missile fire. 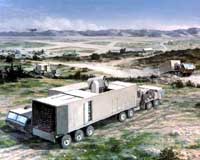 Laser could not save Israeli from Hezbollah’s missiles

The current conflict in the Middle East has shown that this was simply a waste of money. The laser gun, which the Israelis hoped would help them to defend themselves from terrorist missiles, did not work this way at the soldiers’ command.

The idea of creating a so called tactical high-energy laser (THEL), capable of destroying any flying object with an infra-red beam gun, was highly tempting. Laser blocks, located on the northern border with Israel, were supposed to resist Hezbollah’s missile attacks.

In 1996, then president of the USA Bill Clinton and his Israeli colleague Shimon Peres discussed the question of destroying missiles, which were being launched from Southern Lebanon just as they are now. As it turned out, Hezbollah’s arsenal contains not only old-fashioned Soviet model missiles, but also many unpleasant surprises.

It was revealed that laser systems, tested between 2000 and 2002, were capable of intercepting missiles and shells. However, the soldiers admitted that during tests, no more than two missiles were launched at once, according to an article in the New York Times. Military expert Yiftah Shapir informs that 40 missiles can be launched every minute.

According to official data, the national air defense refused to create the lasers due to the exorbitant costs this would entail, writes Shpigel, with reference to a source from the Israeli embassy in Washington .

Another problem that arises during defense from air raids is that in order to produce a sufficient quantity of energy, the laser must be supplied with highly toxic chemicals. This way it can manage two shots, each costing three thousand dollars, without needing to be reloaded.

In addition, a mobile laser block, the size of approximately six large tourist buses, represents too tempting a target for the opponent. “It’s the same as shooting within shooting-range”, admits one of the constructors from Massachusetts Institute of Technology, who has worked on the project as a military analyst since 1996.

Former co-worker of the Pentagon, Albright laconically described the ten years of effort spent on the creation of the laser weapon: “It is simply impossible to resist missiles, other than by controlling them from the launching place or by their falling into a bunker.”

Despite the conflict that has broken out in the Middle East, weapon makers Northrop Grumman Space Technology have presented their reduced version of mobile Skyguard systems. In addition, they have been summoned to protect American airfields from attack. This laser block, estimated to cost $150 million, is capable of covering an area with a radius of ten kilometers. This is not enough to create a solid air shield from missile fire.