A Russian passenger jetliner performed an emergency landing at the airport of Irkutsk, Siberia. The plane skidded off a rain-slicked runway in the morning today and plowed through a concrete barrier, bursting into flames. At least 150 people were killed and 68 hospitalized in the accident, the Emergency Situations Ministry said. 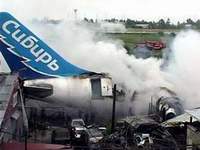 Click here to view the photo report of the accident

The Airbus A-310 belonging Russian airline S7 was carrying 201 people on a flight from Moscow to Irkutsk. Airline spokesman Konstantin Koshman said there were 193 passengers - including 14 children under the age of 12 - and eight crew.

Many of the children were headed to nearby Lake Baikal on vacation, according to Russian news reports.

The plane veered off the runway on landing and tore through a 2-meter-high (6-foot-high) concrete barrier. It then crashed into a compound of one-story garages, stopping a short distance from some small houses; it was not immediately clear whether anyone was in the garages when the plane slammed into them about 7:50 a.m. (2250 GMT Saturday).

A witness said he heard a concussion and the ground trembled.

"I saw smoke coming from the aircraft. People were already walking out who were charred, injured, burnt," Mikhail Yegeryov told NTV television.

"I asked a person who was in the Airbus what happened, and he said the plane had landed on the tarmac but didn't brake. The cabin then burst into flames," Yegeryov said.

"The aircraft veered off the runway. There was rain, the landing strip was wet. So we'll have to check the clutch and the technical condition of the aircraft," he told Russian state television.

The Prosecutor-General's Office said that investigators considered a technical fault or human error as the two most likely versions of the crash, Russian news agencies reported. Koshman, the airline spokesman, said the plane had been regularly maintained at met all certifications.

It took firefighters more than two hours to put out the fire, Emergency Situations Ministry spokeswoman Irina Andrianova said. There were two explosions caused by the fuel in the plane, Moscow radio reported.

Russian television showed smoke rising from the wreckage and firefighters clambering on top.

"It was traveling at a terrific speed," the Andrianova said. She said the front end of the plane was crumpled in the crash 4,200 kilometers (2,600 miles) east of Moscow.

President Vladimir Putin conveyed his condolences to friends and family of the victims and declared Monday a national day of mourning.

Details began to emerge of the chaotic aftermath of the crash. One air stewardess, Viktoria Zilberstein, opened the emergency hatch in the rear of the aircraft and let a number of passengers out, said the Emergency Ministry's regional branch.

Ten passengers managed to escape this way and other survivors, including a pilot, were rescued by firefighters and rescuers from the burning wreckage, ITAR-Tass reported.

The transport minister said the aircraft's two black boxes had been recovered and were being deciphered.

Levitin added that the pilot had radioed ground control to say the aircraft had landed safely and then communication cut off.

Relatives began to arriving later Sunday at Moscow's Domodedovo airport, from where the plane took off.

A man who gave his name only as Vyacheslav, whose brother, wife and 4-year-old son were on the plane, sat on a stone curb outside a crisis center near the airport fighting back tears.

"They're not on the list" of passengers hospitalized, he said gloomily.

His friend Larissa Kolcheva, a 27-year-old Muscovite, said the three had flown up to Moscow from the Moldovan capital, Chisinau, on Saturday morning and spent the day with Larissa and Vyascheslav before leaving for Irkutsk in the evening.

The brother's wife was traveling to the Siberian city to visit her sister, whom she had not seen in 10 years.

"We met them yesterday morning at this very airport. It was great. We spent the day with them seeing Moscow. They were sitting with us in a cafe literally yesterday evening. Everything was beautiful," she said, starting to cry.

Later, a woman hurried out of the crisis center smiling, dialed her cellular phone, and exclaimed "Mama, Pashka is alive. He just went into a clinic." The woman, who declined to give her name, said the man was one of two adult friends of her brother who were on the flight.

In May, another Airbus aircraft crashed in stormy weather off Russia's Black Sea coast as it prepared to land, killing all 113 people on board. Airline officials blamed the crash of the Armenian passenger plane on driving rain and low visibility.

In March 1994, a half-empty Airbus A-310 belonging to Russian state airline Aeroflot crashed near the Siberian city of Novokuznetsk, killing 70 people. Investigators said the crash was caused mainly by the pilot's teenage son inadvertently disconnecting the autopilot.

Sunday's disaster was the fourth air crash in Irkutsk in the past 12 years.

S7, formerly known as Sibir, is Russia's second-largest airline, carved out of Aeroflot's Siberian wing after the collapse of the Soviet Union.

Cash-strapped and saddled with aging aircraft, regional airlines whittled out of Aeroflot were once notorious for their disregard for safety but their records have improved in recent years.

Koshman said there were 11 foreigners on board, from Germany, South Korea, Poland, China and Moldova, the AP reports.