An Al-Qaeda-led group posted video footage on the internet showing the killing of three men it said were Russian hostages seized in Iraq this month. 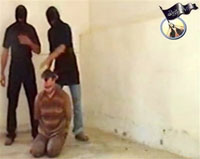 The images, on a website often used by militants, showed two masked individuals beheading one man and shooting another. It also showed the beheaded body of a third.

The fate of a fourth hostage was unclear. The men were seized in Baghdad on 3 June, and kidnappers said the executions were in revenge for "torture, killing and displacement by the infidel Russian government" in Chechnya.

The Mujahideen Shura Council, an umbrella group incorporating al-Qaeda in Iraq, which said it was holding the men, had threatened to kill them if Russia did not pull out of Chechnya. It was apparently the first time Iraqi militants had drawn any connection between themselves and Chechen rebel, The Scotsman reports.

In a statement posted on the website, the group said: "This is the video for carrying out God's ruling against the Russian diplomats, which we present to heal the hearts of believers and in revenge for our brothers and sisters for the torture and killing they receive at the hands of the infidel Russian government."

The statement was reported by al-Jazeera, a Qatar-based Arabic-language satellite television station.

Al-Jazeera said the group has demanded Russia pull its troops from Chechnya and release all its Muslim prisoners.

On June 3, four Russian Embassy employees were abducted after an attack on their car in Baghdad. A fifth Russian was killed in the attack, according to monstersandcritics.com

In Moscow, the Russian Foreign Ministry said it had not independently confirmed their deaths.

"The Ministry of Foreign Affairs and our embassy in Iraq are using all methods and are continuing work to verify the information," ministry spokesman Mikhail Kamynin said.

Moscow vehemently opposed the U.S.-led military campaign and has continued to keep its distance from Washington on the issue of Iraq. Four Russian workers were killed in ambushes in Iraq in 2004.

On Wednesday, the Mujahedeen Shura Council posted a statement on the Internet saying it had decided to kill the four Russians, prompting one hostage's sister, a Muslim, to make an impassioned plea for their freedom, ABC News reports.