A serial killer dubbed as Bitsevsky maniac continues to commit his (or her) bloody crimes. The mysterious murderer has already killed 12 people in the Bitsevsky Park in the south of Moscow (the name of the park served a nickname for the killer). Three dead bodies have been found in the park recently: the body of a 45-year-old woman and two bodies of middle-aged men. 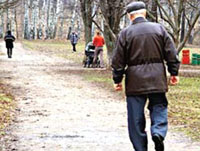 The killer attacks only older men between 50-70 years of age. The criminal approaches a victim from behind and hits him on the head with a steel bar. The maniac only kills his or her victims but does not steal their money or documents. The bodies of two men mentioned above have been found decomposed. One of the killed men was obviously a homeless individual. The other one was a man dressed in decent clothes. Forensic experts concluded that the two men were killed a year ago.

The first victim of the Bitsevsky maniac was found in the park on October 15 2005. The victim, an elderly man, was killed with a powerful blow on his head. The body of the next victim (a 63-year-old man) was found a month later, in November of 2005. The manic has killed nine men in total. Investigators are currently trying to find out if the recent three deaths have something to do with the Bitsevsky maniac because one of the victims was a woman, but the maniac attacks only men.

A forensic psychologist, Milhail Vinogradov, said that the killer was definitely a mentally unbalanced individual. The criminal, the specialist said, had no sexual reasons for committing the hideous crimes, although all of them were obviously based on aggression. There are some individuals who derive pleasure from the act of murder. Statistics says that such people are not rare in the present-day society: there can be one or two of them in every thousand. However, such people prefer not to realize their bloody fantasies as a rule. If a person is mentally unbalanced, he or she may decide to make those fantasies a reality. The doctor said that the killer was most likely a man, probably a former prisoner. “Former male prisoners treat women with respect when they serve one or two terms in jail. This is one of their psychological features. This is probably the reason why the male killer attacks only men. It is not ruled out that the killer is being moved with revenge, especially if he was raped in jail by other men,” the psychologist said.

Mikhail Vinogravod believes that the Bitsevsky serial killer could be a woman who had a certain reason to take revenge on men.

Several Moscow newspapers have published the identikit of the killer. Investigators say that no one has seen the maniac so far. All they can do is to continue patrolling the park and wait until the killer makes a mistake.