Moscow surgeons saved Vasily Stupin from a trip to the nether world. The doctors reattached the man’s head to his body. However, death continued to follow Vasily: the man had to face lethal danger three times afterwards. 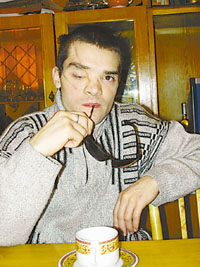 Vasily Stupin was hospitalized with hideous chopped wounds on the head. The doctors said he hardly had any chances to survive: the man’s head and neck were severely injured. Surgeon Sergei Karpenkov examined the patient and concluded that the man was still breathing although he had no blood pressure. The patient started showing signs of life two hours later. The doctors decided to operate the man urgently.

Dr. Karpenkov said that the man was extremely lucky to have his carotid artery intact. Nevertheless, the trachea and gullet were chopped with an axe. The man could die of blood loss and pain shock at any moment. Vasily was still clinging to life despite doctors’ pessimistic forecasts. Two days later the patient was taken to one of the most respectable hospitals in Moscow.

Moscow surgeons did their best to save the patient. They literally gave Vasily Stupin another chance to live when they reattached the severed head to the body. The man had to undergo more than a dozen of highly complicated operations, including plastic operations of gullet, trachea and vocal ligaments. The man said that he had been attacked in the street by a group of teenagers when he refused to share his beer with them. When at hospital, the man lost too much blood. He was staying in a highly critical condition, but his desire to live was very strong.

When Vasily was recovering from the operations, he had to eat and breathe through a special pipe inserted in his neck. One day he was sick and tired of pipe-eating: he pulled it out of the neck, went to the nearest grocery store, bought a piece of grilled chicken there and ate it. The doctors were shocked: if the stitches had come undone nobody would have been able to save the man again.

Vasily, a 25 year-old-man has someone to live for. When the tragedy occurred, his girlfriend was four months pregnant, although the young man knew nothing about it. He was overwhelmed to know later that he had become a father to a healthy baby boy.

Despite the yearning and physical pain that the man had to experience, Vasily still remains an optimist. He strongly believes that he will live a long and happy life, although he will have to undergo too many operations to have his face and right eye reconstructed. Doctors say that the man has survived owing to his luck and force of will.

One of the underage criminals, who attacked Vasily, was sentenced to seven years in jail.