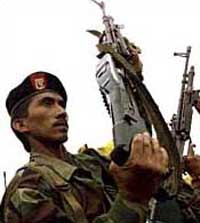 Colombian rebels released two hostages held captive for six months over the weekend, bringing new hope for the resume of peace talks with hard liner Alvaro Uribe’s administration. The hostages released are two police officer but did not comment over the decission.

The Revolutionary Armed Forces of Colombia, or FARC, released the police officer and cadet at La Dorada in Putumayo province, about 335 miles southeast of Bogota, near the Ecuadorean border. The Red Cross said the two were released in good health.

The FARC’s decission came one week after right-wing president Uribe obtained a wide support in the past legislative elections, which according to local and international observers has paved the way for his future reelection. The FARC has largely rejected peace entreaties, declaring as recently as January that it would never negotiate with the government of Uribe.

Uribe thanked the International Red Cross for its help and urged the FARC to release all its captives.

The FARC is the Colombia’s oldest and largest marxist rebel group and still hold about 600local prominent political figures, as well as foreign citizens, including three US defense contractors. The group uses kidnappings as a source of income and to pressure the government in its struggle to establish a Communist state.

Since Alvaro Uribe rose to power, violence has gathered steam in Colombia, and military incursions in FARC controlled territories became frequent. The policy has probed to be effective as kidnappings have fallen by more than 70 percent since Uribe took office in 2002 and increased the number of soldiers and police.

Uribe’s decission to attack the FARC and the other rebel groups has rewarded hima strong support among the Colombian population and paved the way for his reelection. Colombia, however, remains the world leader in abductions, with 800 kidnappings reported last year.