In mid-February a trend was dramatically revealed, which experts had been warning about even before coalition forces, led by the USA, launched their invasion of Iraq. Moreover, it is becoming more and more obvious that the democratic form of government, at least as it exists in the West, can perhaps not be successfully implemented everywhere, and may be a phenomenon which belongs exclusively to Western culture. Following explosions in the holiest Shiite mosques of Samarra, a new wave of violence hit Iraq. This time the crowd’s anger was not directed at the occupying powers or the government which they have established. Enraged Shiites stormed onto the streets with the aim of destroying as many of their Sunni enemies as possible. Although it had not been proved that the Sunnis were to blame, it was primarily they who were punished for the attack. In this case it is entirely appropriate to wonder whether this was an act of provocation. Yet it really is hard to imagine the most likely reason for inciting civil war, especially considering that complex negotiations have now begun between representatives of the main groups over the formation of a coalition government. 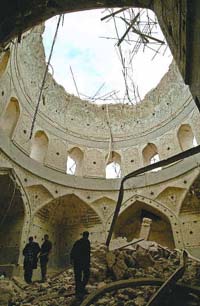 It is hard to say whose provocation this was. As ever the ideologues of the Iraqi resistance suspect the USA, many Sunnis claim that the Shiites themselves blew up their own mosques, if only so that they would have a reason for getting rid of their enemies. Yet in such an explosive environment as has emerged in Iraq, it only needs the slightest spark to ignite a blazing civil war. Let us not forget that practically all Iraq ’s neighbouring countries could be interested, to varying extents, in exacerbating the situation.

It is well known that Turkey ’s relations with the Kurds are extremely strained, Iran’s elites see their country as the regional leader, capable of uniting all Shiites behind a struggle. For the oil-producing states on the Persian Gulf, which mainly adhere to the Sunni branch of Islam, a peaceful strong Iraq could become their main competitor on the oil markets.

Recent events in Iraq again direct one’s thoughts in another direction: to what extent the democratic form of organizing state power can be suitable for all the planet’s different cultures. We should not be in any doubt that, in the framework of Western civilization, democracy has fully proved its effectiveness. However, the problem is that inhabitants of other regions in the world can often not even understand the point of a system of popular rule which defends the rights of minorities.

Let us examine the case of Iraq. The majority of the country’s population categorically does not want to take the rights of the minority group into consideration, especially as this minority, namely the Sunnis, oppressed, killed and tormented their countrymen throughout the decades of Saddam Hussein’s rule. It seems as if the only means for mobilizing and increasing the organization of Iraq ’s citizens would be according to their religious or ethnic background. It is hard to imagine anything worse from the point of view of developing a fledgling democracy. As we know, practically no religion allows any room for compromise, and national identification in one way or another encourages groups to cut themselves off from “outsiders”.

All this makes the task set by the Bush administration of building a system of popular rule in Iraq practically unachievable. It is thought that leaders of the military operation and State Department experts also understand this. One can assume that as a result they will be forced once again to rethink the aims of the invasion. Although only to be done in secret, it is possible to fairly precisely formulate these aims. Limiting any military losses, implementing order in the country by any possible means, resuming effective oil production, establishing an administration capable of controlling the situation – this is a list of the tasks facing the occupying powers in the near future. But it will be extremely difficult to fulfil even these aims. New difficulties are constantly appearing: at some point another examination will show that the new Iraqi army is wholly incapable of fighting, then it will emerge that the ministry of internal security, taken under full control by the Shiites, undertakes mass shootings of Sunnis ‘out of hours’. It would seem as if the American administration now has extremely limited resources for improving the situation. In any case, however, it is clear that the key to the USA attaining these goals is through a fundamental reevaluation of the situation, which excludes the possibility of building even a token democracy.