There are up to 50 thousand skinheads in Russia, which is equal to their quantity in the rest of the world

Another massive fight took place in the Moscow metro on Sunday night. A group of Russian skinheads attacked two young Caucasian men on the Belorusskaya metro station at about 11:10 p.m. Potential victims showed a surprisingly powerful resistance: they would have won the fight but the police put an end to the scuffle. 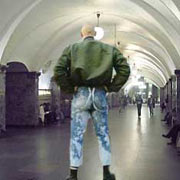 Several young men of Slavic looks came up to two nationals of the Caucasus and attempted to beat them. It was not reported what kind of weapon the assaulters had, although the Caucasians pulled out knives and used them for their own defense.  Four skinheads were wounded as a result of the fight. The men were hospitalized to Sklifosofsky Institute with stab wounds, the Moscow ER Center said. The police also detained all other members of the fight.

According to the information from law-enforcement agencies, there are about 15-20 thousand skinheads in Russia. About 5,000 of them conduct subversive activities in Moscow. The numbers are most likely underestimated: there are up to 50 thousand neonazis of various beliefs in Russia, which is equal to their quantity in the rest of the world.

Pseudo-patriots attack everyone of non-Russian nationalities – they do not have any mercy on either children or elderly people. A group of skinheads in the Russian city of Lipetsk attacked an elderly doctor several days ago. The man was lucky to survive in the fight: two Russian women rushed to help the man and managed to pull furious teenagers away from their victim.

It goes without saying that such defenders are highly rare: the majority of citizens prefer to stay away from infuriated bald-headed young men in military clothing. An encounter with skinheads usually ends either with severe injuries or a lethal outcome for a victim. Skinheads killed 44 people in Russia last year and injured about 200 – presumably Africans, Caucasians and Asians.

If criminals are not caught red-handed, it is extremely difficult to find them and call into criminal account afterwards. To crown it all, such words as “national hostility” can hardly be found in the majority of sentences that courts bring down on neonazi criminals. Such cases are usually categorized as “homicide” or “causing severe bodily harm.”