Last Friday, 17 February, at a market in Moscow specimens of beef from twelve carcasses were taken for analysis by veterinary-food hygienists. 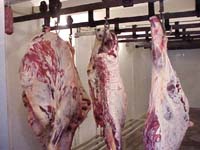 Experts in Moscow’s veterinary laboratory confirmed that in one of the samples traces of Siberian plague (anthrax) were found. The twelve carcasses arrived at the market with the correct veterinary certificates, issued by the doctor in the village where the meat came from as is customary in the struggle against infected animals.

Specialists, in accordance with guidelines regarding the measures against anthrax, have written to the administration of the market and to the owner of the meat forbidding them from transferring any meat and having contact with the workers until further notice. Disinfection of the market premises has been carried out.

As a preventative measure the village where the meat originates is vaccinating and revaccinating susceptible animals. The move is one of the measures being taken in the fight against this disease. The meat found at the Moscow market infected with Siberian plague has sparked a criminal investigation. The office of the public prosecutor has started an investigation into the transfer of meat that does not meet safety regulations.

It is a serious disease that can affect both animals and humans. Anthrax is primarily a zoonotic disease of herbivores, with cattle, sheep and horses being the usual domesticated animal hosts, but other animals may be infected. Human disease may be contracted by handling contaminated hair, wool, hides, flesh, blood and excreta of infected animals and from manufactured products such as bone meal, as well as by purposeful dissemination of spores. Infection is introduced through scratches or abrasions of the skin, wounds, inhalation of spores, eating insufficiently cooked infected meat, or by flies. All human populations are susceptible. Recovery from an attack of the disease may be followed by immunity.

Treatment: Although effectiveness may be limited after symptoms are present, high dose antibiotic treatment with penicillin, ciprofloxacin, or doxycycline should be undertaken. Supportive therapy may be necessary.