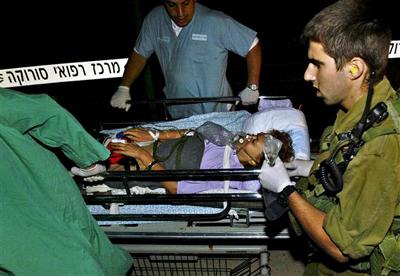 Six Russians who have fallen victim to a terrorist act in one of the Egyptian resort towns of Taba remain in hospitals in Israel and Egypt , reports RIA “Novosti.”

“Two of the victims are in critical condition in one of Israel's hospitals in Eilat. One woman has a fractured spine. The other four injured have been placed in Egyptian clinics,” stated Russian Embassy's spokesman to RIA “Novosti”.

One elderly woman from the Russian town has died as a result of a massive explosion. According to the diplomat, all Russian tourists will depart for Moscow Saturday night. Russian 2nd TV channel (RTR) reports that whereabouts of the other 8 Russians remain unknown.

There was initially a total of 232 Russian tourists officially registered in the Hilton hotel, where a major explosion occurred late Thursday night. Two large groups of Russian consisted primarily of Moscow and Ufa residents. The groups also included a few people from Ukraine and Byelorussia. According to the travel agency in Russia, none of them had been hurt.

Total number of the dead has reached 33 persons, stated today an Israeli radio with a reference to the Israeli army spokesman.

Terrorists to be identified by means of DNA analysis
Investigators are currently questioning Sinai Bedouins in an attempt to establish terrorists' identities. Police has found four burnt bodies and has been able to collect fingerprints in the two cars used to bombard the Hilton hotel and the two camping sites near Nueiba.

According to Saturday's edition of the Al-Hayat newspaper, police began questioning locals after discovering that those Sinai Bedouins had been the ones to sell the explosives to several unidentified people. It has been estimated that 200 kg was used to blow up the Hilton hotel.

At the same time, police is trying to figure out how those terrorists have managed to come to Egypt in the first place: whether through Israel, Jordan, the Arabian peninsula or Sinai. According to the experts, those suicide-bombers had acquired the cars upon their arrival from other members of the group, which supposedly is “Al Qaeda’s” “sleeping foxhole”. It is also possible that the group's members could have had some ties with  Aiman az-ZAvahiri, who had viciously criticized Egypt-Israel relationships in his latest address.

Investigators also do not rule out the possibility of the Egyptian involvement in the terrorist acts. Egyptian extremist organization “Islamic Jihad” has joined “Al Qaeda” a few years ago. Egyptian law-enforcement officers have already detained three suspects. However no details have been revealed yet.

Egypt and Israel have refused to accept help from the US.

Organization entitled “Islamic monotheistic battalions” has claimed full responsibility for the explosions. As it is known, “Al Qaeda” has been creating special groups under various names containing such words as “Islam”, “Jihad”, “Allah”, “Muhammad”.