Akhmad Kadyrov for Pravda.Ru: The Situation in Chechnya is an Internal Issue of Russia and Chechnya - 9 May, 2004

From Interview with Akhmad Kadyrov by PRAVDA.Ru correspondents, 2003, 25 July, Moscow 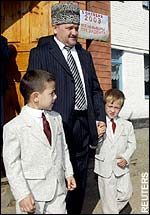 - Akhmad-Haji, Do you see the Republic of Chechnya as a Muslim, an Islamic one?
- I was strongly against the introduction of a Sharia government in the republic - but not because I did not want such a thing. I am working hard for it, actually. But I know that we are not ready. One has to nurture a new generation, to raise children in the spirit of Islam.
The Sharia regulations that they gave us were simply an interpretation of the Sudanese ones. They were approved by Yandarbiyev, and he did not ask anyone. When Aslan Maskhadov and I visited Saudi Arabia and met with the government of Sudan, Sudanese officials told us that it had taken them 11 years to institute a Sharia government. Did we want to have everything done in one day? Things do not work like that.
Furthermore, who dictated Islam to us? Movladi Udugov, who does not have any idea what Islam is? Or Maskhadov and Yandarbiyev? Who are they? They do not know the bases of Islam, they do not understand it.
All these people ran a separatist policy deliberately.
Why is all this happening in Chechnya? Because the Chechens are warriors, first and foremost. Second, they are very trusting people - I am saying this to you as a Chechen man. We trust everyone else, but we do not trust each other. We believe people of other nationalities more than we believe each other. All the wars that have taken place in Chechnya since the era of tsarist Russia were unleashed by people of other nationalities. Unfortunately, our nation has never had a leader who would stand up for his nation.
Military troops were withdrawn from Chechnya on Dec. 31, 1996. But what did "free Chechnya" do? It opened the door to criminals from the entire territory of Russia, the former USSR and its outskirts. Criminals were coming to Chechnya from all over the world - they did not have a place in their own countries. But they could live perfectly well in Chechnya.
Non-Muslims were allegedly converting to Islam. It is ridiculous to talk about such a thing . Becoming a Muslim for them implied growing a beard and learning how to pronounce "salam aleykum." What kind of a Muslim is that?
I grew up in a very religious family.  I could read the Qu'ran easily at the age of five. Do you think I can stay calm when such people try to teach me what Islam is, how to pronounce it and what to do with it?!
If Yeltsin and Maskhadov signed a peace treaty between Russia and Chechnya, why did the incursion into Dagestan take place? If we, as a separate state that had concluded a peace treaty with Russia, attack a neighboring republic, a unit of the Russian Federation, is it called Jihad? No, it is not. It is a provocation to unleash a war in Chechnya.

- But you declared Jihad on Russia in 1995. You were waging war on Shamil Basayev and Aslan Maskhadov's side.
- Yes, I was on that side, and I am proud that I was able to choose the right way to go. There are specific reasons for why I declared Jihad and why I changed my position. That was a time when people were gripped with the idea of liberation. They thought that people like Dudayev or Yandarbiyev wanted freedom and an Islamic state for Chechnya.
And what happened next?
There is a rule of Sharia: If the enemy wants to suppress you, you are supposed to put up a strong resistance. But the enemy did not come on its own: We brought it to us. We went to Dagestan, arranged a massacre there and then returned. This means, as they say, that Russia is the enemy that came to the borders and demanded that the bandits should be delivered - Basayev, Khattab, everyone who had been in Dagestan. But instead of delivering the bandits, Aslan Maskhadov appointed them commanders. He accepted the war, and that was when I stood up against them.
I appeared on television and called upon people to bring their sons, their brothers back - everyone who was going to Dagestan. I said that it was a war between neighbors, between Muslims. But it didn't work. I personally told Maskhadov not to let Basayev go. Aslan assured me that Basayev was not coming back to Chechnya, because he had a plan: To first conquer Dagestan and then attack Azerbaijan and spread the ideas of Islam.
I objected. I said that Russia would not surrender Dagestan, because it is a border territory, a route to the sea and out of the country.
I addressed Ruslan Ali-Hajiyev, chairman of parliament, asking him to dismiss Maskhadov, to take power into their hands: Otherwise, a war would be inevitable. He answered that, if Maskhadov were dismissed, according to the Constitution, Arsan Alakhov would become the head of the republic. That would be even worse. I asked him to tell Arsan's people that Aslan was leading the republic to war. They did not do it, they decided not to do it, and so we had the second Chechen campaign.
No one managed to come to a consensus. When the election is over, how will it be possible to unify the republic, the Chechen nation, in order to avoid such disunity in the future?

- The republic is already united - the referendum of March 23, 2003, proved it.
- There are no reasons to doubt that it was the free expression of the nation's will. Even our Deputy Aslakhanov, who is constantly talking about the need to conduct negotiations with Maskhadov, was in Chechnya during the referendum and he said in an interview that he would never have believed it if he had not seen it with his own eyes.
People took part in the referendum because they were tired of the war. They are afraid of talking about it out loud, but they have shown exactly where they stand: Yes, we want peace, and we want to be a part of Russia. They would have voted that way in 1992 and in 1993. If Jokhar Dudayev had conducted a referendum in 1992 to find out what people really wanted, we would not have had the First Chechen War. If Maskhadov had permitted a referendum on Chechnya's status in 1997, 1998, 1999, we would not have had the second war either.
- When the election is over, there will still be field commanders and their troops- How can this problem be solved? It may bring all the election results to nothing.
- An elected government is needed to fight them. We need a strong police force - the Interior Ministry of the Republic of Chechnya.  We have to get rid of the traitors who have managed to penetrate into the law-enforcement department. Such work is being already conducted, and there are results every day: In the police force, two, three, five traitors are detected who are really working for someone else. When we cleanse the police of them, the problem will be simplified a lot. Terrorists will have no one to contact - they will be left without informers.
That is why I came to conclusion that the election must take place, so that the republic can have a government. If I were to say that everything will change for the better immediately, that would not be true. The struggle will continue for a long time.
But the people who surrender are given weapons again absolutely legally. What if traitors continue to penetrate into the police? It is so easy to pretend that you surrender to the authorities and then-
If someone comes, lays down his arms and obtains legalization from me - these people are reliable, and they really work. They work very efficiently - this is known not only in Chechnya, but in Moscow as well. We check such people, and they are under my control. Why do we need them? Because they know terrorists by sight, they know where terrorists might be staying. That is why I insist they work against the bandits.
- In other words, you are saying that you are in control of the situation in the republic?
- We live in Chechnya, and we know the situation from within. Basayev, Maskhadov, Gelayev - they exist, and we have to fight them. They are absolutely in the wrong when they try to talk to opponents using the language of force. This is an absolutely hopeless way to go, even for the most just and liberating of movements and for the most righteous ideas in the world. One has to work for years and decades, to conduct negotiations, to stand for positions and points of view, to jointly develop a civilized view on the administrative and state organization of Chechnya.
Obviously, not everybody likes such an approach, and not all people will have enough patience and wisdom to understand it, but I do not see any other way. People like Yandarbiyev, Khalimov, Maskhadov  - they do not live in Chechnya, they did not provide safety for their people, they do not help their nation. They tell people to take a gun, kill someone and earn money. I consider such an attitude to Chechnya to be criminal.