The bravery of the Russian pilot of the Su-25 attack aircraft, which was shot down on Saturday, Feb. 3 over Syria's Idlib, has impressed many in the West. Numerous foreign publications wrote that the Russian pilot showed an extraordinary example of courage and bravery. 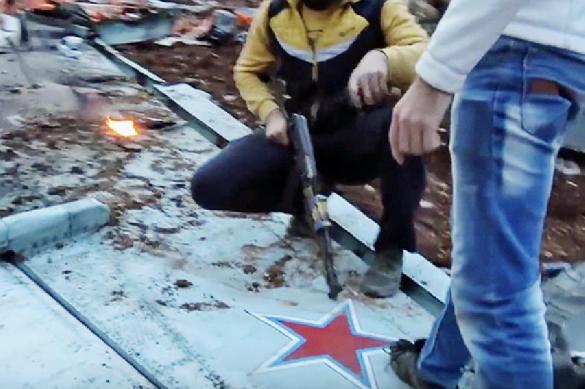 The pilot, Roman Filipov, died like a hero in a battle with a group of terrorists after he had ejected from his plane.

The Daily Mail (UK )and Time (USA) published articles about Major Filipov, the pilot of the Russian Su-25 attack aircraft, which was shot down with a MANPAD missile on February 3 as the aircraft was flying above the de-escalation zone of Idlib in Syria.

Filipov died having exploded his grenade during a fight with terrorists. Having read the article about his brave act, many British readers called him a brave man and a real soldier. Foreigners assumed that Russia would honour the hero accordingly.

Others wrote that the pilot's heroic act showed that the Russians retained the character of their grandfathers who went through World War II.

Others wondered where the terrorists could get anti-aircraft missiles from. While the West continues accusing Bashar Assad of all sins, terrorists receive new weapons that may eventually enable them shoot civil aircraft down.

Russian Defence Minister Sergei Shoygu recommended Air Force Major Roman Filipov to the title of Hero of Russia. His family and friends will receive all necessary assistance and support. After the missile struck the plane, Filipov was doing his best to steer the aircraft in the air. He reported the attack to the command. The pilot ejected in the area of the village of Tell-Debes in Syria's Idlib, which largely remains under the control of terrorists.

When on the ground, Roman Filipov was conducting an unequal battle with terrorists. When the terrorists seriously wounded and surrounded him, the Russian military man blew up his hand grenade shouting "Take this! This is for our guys!"

On February 5, people started bringing flowers to the building of the Russian Defence Ministry in Moscow in memory of the Su-25 pilot. People bring roses and carnations to the monument, where photographs of the pilot in civilian clothes and military uniforms are on display. Passers-by stop and hold a moment of silence in memory of Major Roman Filipov.

One of the streets in the city of Vladivostok, where the officer had served, is likely to be called in memory of Roman Filipov.

The Russian Defence Ministry asked Turkey for help to retrieve the wreckage of the Su-25 attack aircraft that had been shot down above Syria. Russian experts want to obtain fragments of the aircraft engine in a hope to find out what kind of a missile terrorists used to shoot the plane down.